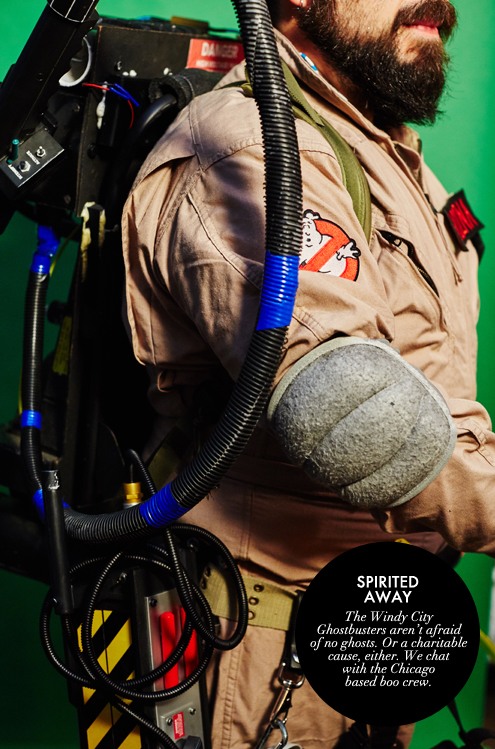 For our Totally ‘80s Glossed & Found Halloween special, we found a group of Chicago Ghostbuster enthusiasts who make and wear their own movie-accurate costumes, raise money for local charity groups and ain’t afraid of no ghosts. THE WINDY CITY GHOSTBUSTERS don’t just get suited up for Halloween—with 44 members strong!—the group is part of a global network of Ghostbusters who are doing good and are on call for all of your spectral elimination needs. We caught up with WCGB founder Chris O. Biddle to give us all the spooky deets on Chicago’s very own gang of Ghostbusters.

When Chris started WCGB in 2012 he never imagined how many active Ghostbusters exist around the world. With GBs in Italy, Germany and the United Kingdom, each franchise is unique in how they custom create their gear and go about procuring Ectomobiles. The WCGB almost all have some variation of the accurate uniform—including about 30 proton packs, 2 Ectomobiles and a handful of slime blowers. One member exclusively does nothing but Slimer. There’s a Gatekeeper. A Janine Melnitz. A Gozer. A Keymaster. And even a cute Lady Stay-Puft. And they’re the only franchise with a stilt-walking Statue of Liberty.

To date, the WCGB have raised over $2,000 for the Treehouse Animal Shelter and the La Rabida Children’s Hospital. They were even invited to attend the world premiere of the new Ghostbusters in Los Angeles this year—walking the green carpet!—and had the chance to meet many of that new and original cast members. We can’t get enough of the WCGB’s enthusiasm for geeking out about this ‘80s classic and sharing that joy with everyone around them. Looking good and doing good! Follow along below as Chris gives us the inside scoop on how to gear up for a specter or ghost, who the unicorn of the Ghostbuster community is and naming your proton pack.

What goes into building a proton pack?
Whether you assemble it yourself in your garage or purchase one off of Ebay, the first time you put it on is very special. It’s often the last piece of equipment that a GB collects. Most proton packs are made out of fiberglass or resin. We usually have custom sound systems and lighting rigs to mimic the SFX from the movies. Some proton packs have e-cig kits in them to emit “smoke” as they do in the movie. We also tend to name our proton packs. Just like how bluesmen will name their guitars. A guy in our group named his pack Julie, after Julie Newmar. Another guy named his pack Lady Bethany Von Positron. I named mine Black Betty. Her last name, which I don’t use very often, is of course, Bamalam.

Tell us a little more about your Ghostbuster gear?
I think most GBs tinker with their uniforms over time, forever. Constantly adding pins, uniform pieces, equipment, etc. We also call it a uniform and not a costume. Most ghostbusters will silently judge you for calling it a costume.

What was is like meeting the OG Ghostbusters?
I’ve had a chance to hang out with both Ernie Hudson and Dan Aykroyd and they’re both really stellar guys. Sadly, I wasn’t able to meet Harold Ramis before he passed. Bill Murray is the unicorn of the ghostbusters community. You never know where you’ll meet him and how he’ll feel about you being a ghostbuster. He’s mercurial. For me, meeting Murray would be a pretty exciting experience.

When it comes to Halloween, are you obligated to dress up as a Ghostbuster?
Halloween is our busiest season. Truth be told, all of us enjoy any excuse to put on our gear and get out into the city. Chicago can expect to see the Ectomobiles out and about in October. We also love to dance. Kick on the latest pop songs and see if the entire group doesn’t slowly break out into dance. Ghostbusters love to dance.

The 2016 Ghostbuster reboot—yay or nay?
The scene where Holtzman fights alone, while the GB theme plays a rocking orchestral version, still gives me goosebumps. I laughed quite a bit throughout. Right after it came out, I got a message on Facebook from an old college friend. After seeing the movie, her 6-year-old daughter started planning out her Halloween costume and wanted to pick up a proton pack toy to play with. Despite all of the controversy around that movie, it gave that little girl a hero that looked like her and ignited her interest in science, the paranormal and Ghostbusters.

Keep an eye out for Windy City Ghostbusters this Halloween weekend, and catch the who WCGB crew at the McDonald’s Thanksgiving Parade next month, November 24.