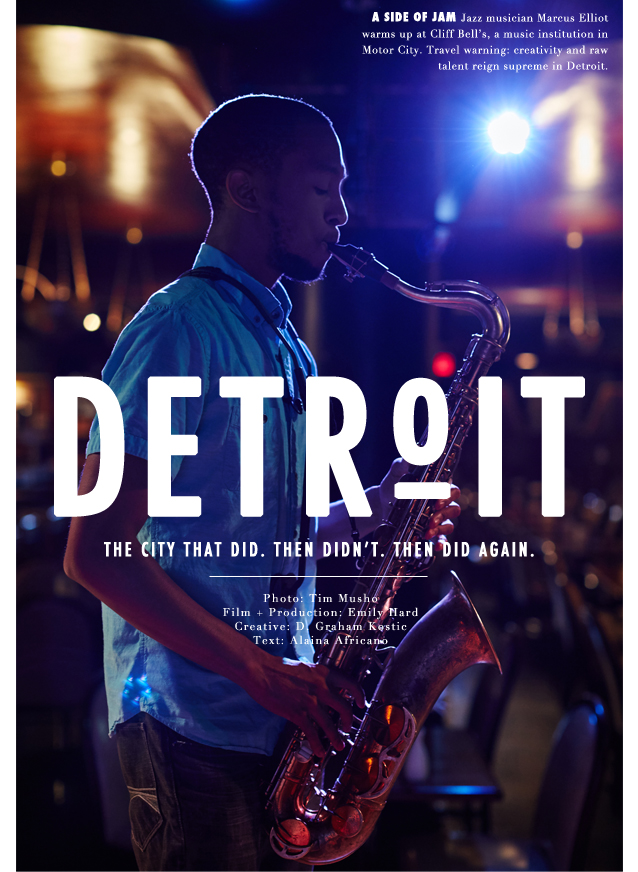 Outsiders often come to DETROIT in awe of the ruin and decay. Visitors and urban explorers can’t help but photograph what’s left of a once booming industrial and cultural epicenter. It’s a city that’s so beautiful and vulnerable at the same time. But what we uncovered in Detroit was a thriving community. A community that upholds a value system synonymous with the true American Dream—Support Your Neighbors! Live Creatively! Uphold Kindness!

But first, a history lesson: Detroit rose and fell with the automobile industry. At the turn of the 20th century, Motor City was established as a center for commerce bringing in a new class of wealthy industrialists, entrepreneurs and professionals. Between 1900 and 1930, the automotive industry in Detroit went from its conception to full-on domination, with new jobs growing the population from 265,000 to over 1.5 million in those 30 years. The post war era brought global competition for automotives creating tension which affected manufacturing technologies, racial divides, unemployment and crime rates. This perfect storm contributed to the steady decline of the Detroit economy. 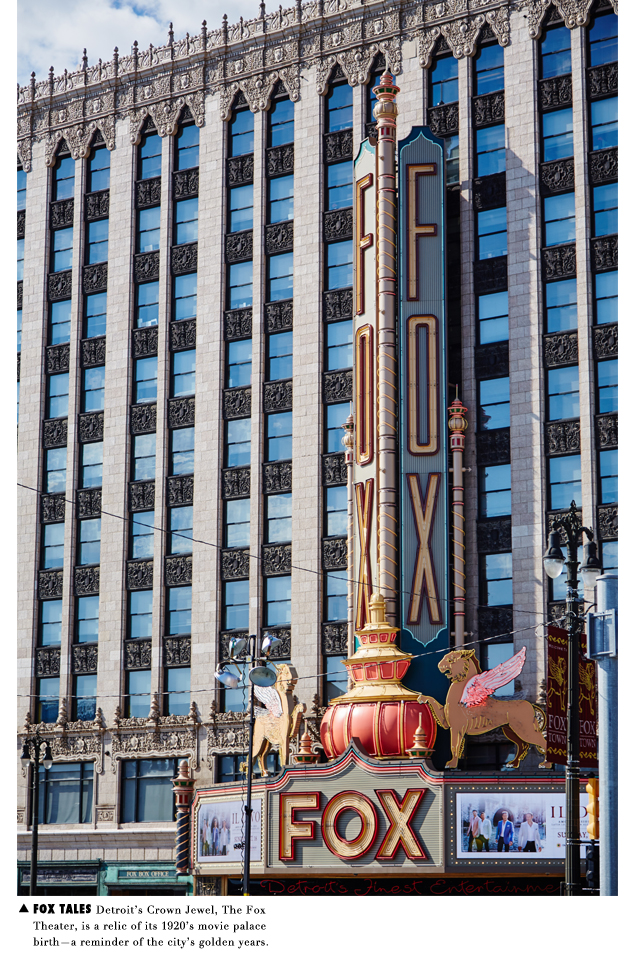 With the hotbed of history that is Detroit, anything seems possible now. With 40 vacant square miles, there’s room to experiment and explore. It’s a place where the optimists shine and wear their resilience with pride. With resemblance to Brooklyn and Berlin, you see a rebounding city entering a modern renaissance fostering creativity, perseverance and kindness above all else. Where the line between industries are blurred, and proud residents are the ones who not only find beauty in the ruin, but challenge those around them to build the future out of it.

We interviewed a handful of creators and makers who are hustling to put their ideas out into the city and the world. They’re all finding an identity in a place where people have so many misconceptions, labels and connotations. Buckle up and follow us on a mini tour across the Motor City as we delve into a community building a Detroit for the people and by the people. >> 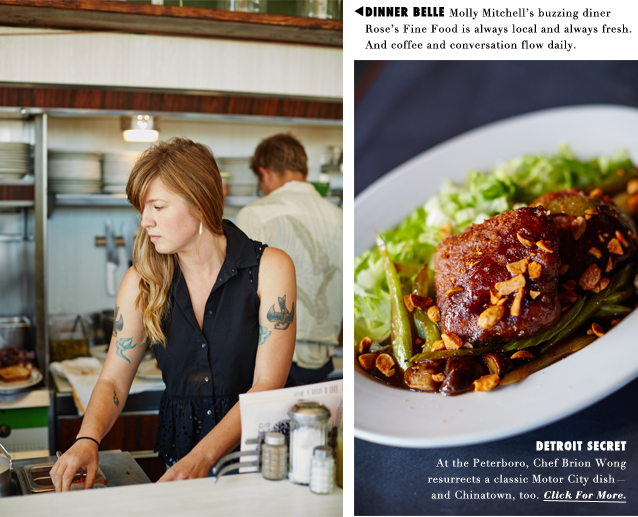 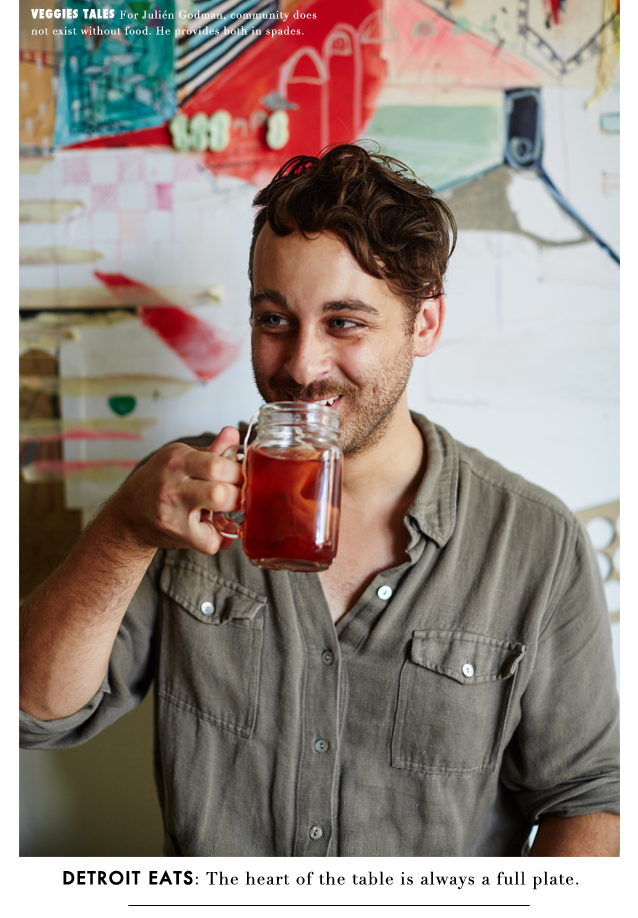 While Detroit is known for plenty of things from cars to crooners, one common denominator that has bridged the community regardless of industry is food. From the no-frills-yet-to-die-for loaves of Avalon Bakery to the fancy digs of Selden Standards locally sourced eats by James Beard semi-finalist chef Andy Hollyday, Detroit’s foodie scene goes far beyond the idiosyncratic Coney Dog. We dive into sourcing the freshest perspectives of Detroit cuisine. Motor city through the super sparkling blue eyes of JULIÉN GODMAN is multifarious. This man-about-town brings light and relevance around healthful, vegetarian fare to the general populous. Julién organizes monthly pop-up brunches featuring old-world Armenian recipes along with the world of herbal and holistic teas created under his Tonic & Juice venture.

“Detroit’s culture is more of an indiscernible collection of human aura that allow for such concepts of freedom, empowerment and creativity to come through into the hands of both the people who have lived here as well as the people who have moved here,” says Julién.

His poetic schtik is only outshined by impeccably prepared—and well-portioned!—Armenian favorites. Give the man a grape leaf and his vegetarian stuffing will be the best souvenir you might find in Detroit. Not to mention, the communion of bringing people together at one table to share stories, experiences and a toast to good health, too. 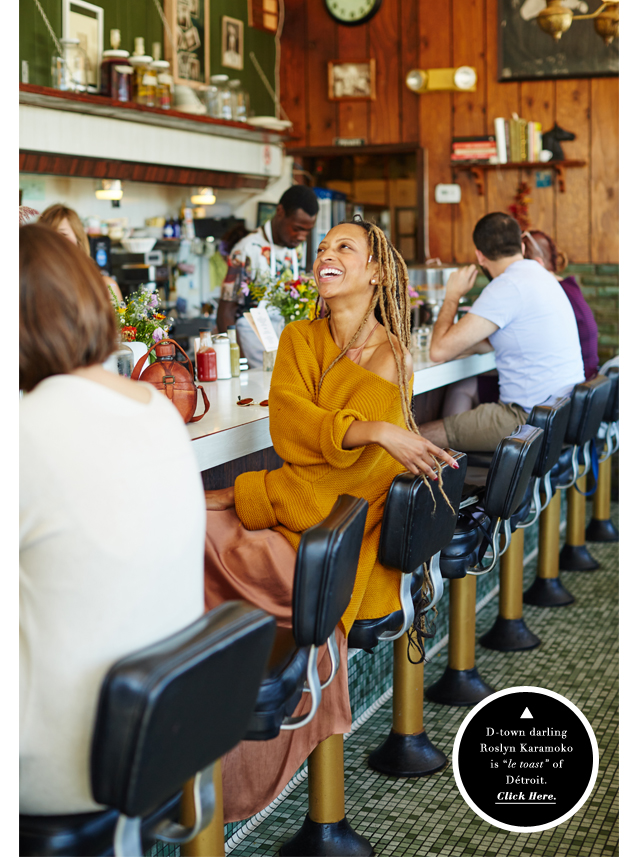 On the other side of town, ROSE’S FINE FOOD mission is simple: delicious quality food made and served by workers paid a living wage. Rose’s is something of a utopian vision, putting forward standards of social justice and standards of hyperlocal cuisine. This ultimate diner is the brainchild of owners Molly Mitchell and Lucy Carnaghi. They make the extra effort to coordinate daily with local farmers to bring customers access to local ingredients of unprecedented freshness and quality.

“From-scratch is the way the game is being played now, and as people taste the difference, it gives the farmers a bigger toe-hold in the market, as well as hearts and minds of the city,” says co-owner and chef Molly Mitchell.

From the uber-charming mismatched china and their famed Poodle Platter (Two poached eggs! Sautéed garlic greens! Spiced potatoes! And a slice of house toast!), Rose’s house-made cuisine and humble atmosphere is everything you could ever want in a classic diner. 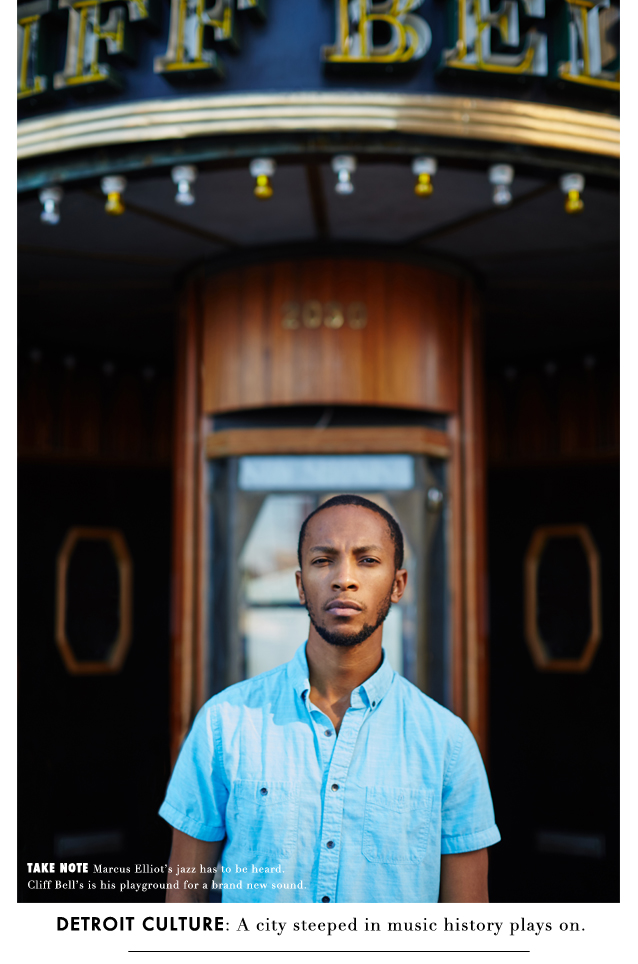 Detroit’s contribution to the legacy of music is immense, spanning across genres and heard around the world. Motown records was a revolution, releasing music from The Supremes, The Jackson 5, Marvin Gaye and many more household names. J Dilla and Slum Village took hip hop from the ‘90s to the new millennium. Techno greats like Carl Craig and Juan Atkins also carved out a unique Detroit sound. Now, Jack White cites Detroit rock and blues as inspiration. It’s perfectly fitting as he also recently brought his Third Man Records to his native city. While you can shop Jack’s label and dig for other waxy finds, it even features an old school vinyl press in the back which is a rarity in the states. In short: The motor city is home to sonic energy and a community playing out its history. MARCUS ELLIOT is no exception. He’s a tenor saxophonist representing the next generation of jazz musicians. He performs solo, leads smaller jazz groups and is a member of Detroit Symphony Orchestra Civic Jazz Ensemble. His dedication to jazz is paralleled with his commitment to the revival of Detroit.

“There is so much happening and the best thing I can do is observe it and capture it sonically,” says Marcus, “It’s a beautiful story [in Detroit] and I want to be a part of this.”

But Marcus shares a red flag warning about the rapid growth within his city. “People want to ‘Christopher Columbus’ Detroit,” he says, “It’s a misconception that it is a clean slate to build on.” And thus, Marcus holds on tightly—and respectfully—to the small but mighty Jazz community with deep roots in the African-American tradition. His motto for Motor City? “Your Story Matters.” 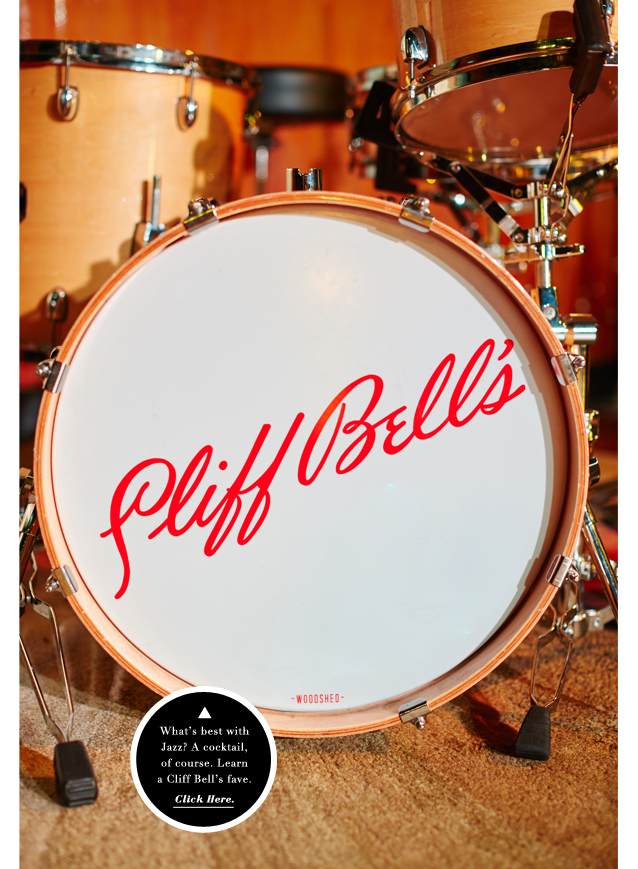 You can catch the Marcus Elliot Quartet every Tuesday at the famed Cliff Bell’s. The speakeasy vibes from this Detroit institution CLIFF’S BELLS are not put on heirs. Proprietor John Clifford Bell weathered 13 years of prohibition operating some of the most popular watering holes in Detroit. In 1935, he went out on a limb, unveiling a slick joint done up in mahogany and brass. Featuring air conditioning and refrigeration, the place was a respite for the cocktail crowd eager for a stiff drink and great music. Today, the place is still popping. 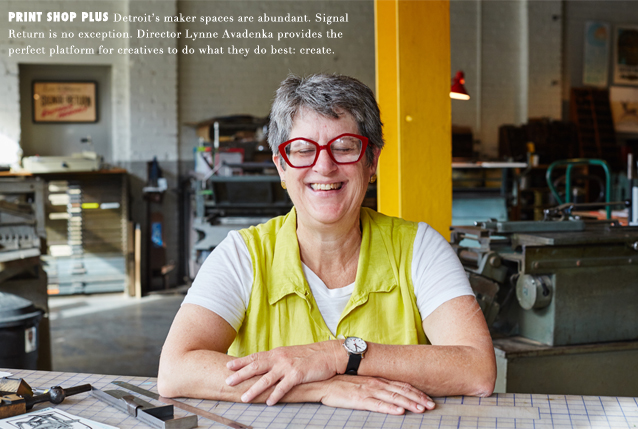 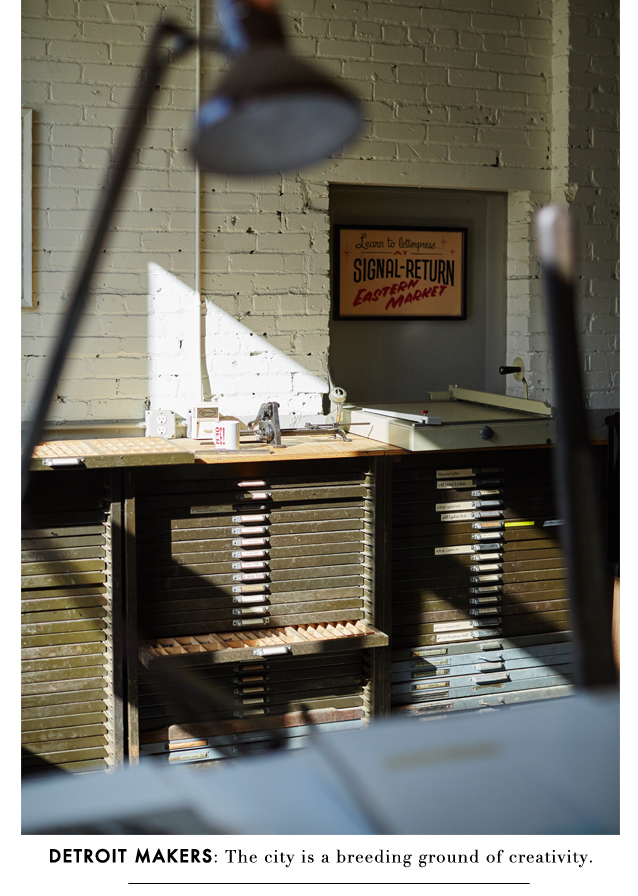 You know the saying: build it and they will come. It’s no exception in Detroit, where plenty of artisans and craftsmen doll out offerings across the board of American goods fabricated in old-school style. With so much physical room in the city, companies spearhead maker spaces to allow artists to combine costs and creative energies to allow for the support of talented individuals and their brilliant ideas. Ponyride is one example of such that houses 30 organizations under one roof. Across town, the impressive EASTERN MARKET gives makers a space to strut their stuff and hawk their wares. Eastern Market tenant SIGNAL RETURN is a print mecca of sorts—and then some. A large industrial space with exposed beams painted bright yellow. It’s a haven where people come together all for the love of printing. Signal Return provides access to a slew of different printing machinery, from proof presses to metal and wood type, for local artists and educational workshops. Director Lynne Avadenka along with their small team help foster a relationship with the outdated, technically-abandoned skill of letterpressing. The environment is quite allegorical—teaching an outdated, analog technique in a fast-paced society saturated in technology and instant gratification. Preserving the art of letterpress creates a tactile interaction that begs you to slow down and create.

Muralist ELLEN RUTT shares a similar vibe to Signal Return. And she shouts to the rooftops the need to be weird—or at least to be yourself. As a multi-disciplinary artist and designer, she’s made her mark around the country creating eccentric murals and pieces for clients like Red Bull, Budweiser and WeWork. Regardless of who is tapping her nationally for the next big thing, her brush is always planted firmly in the city she loves.

“When you have an idea to have something to make, you can really make it happen here,” says Ellen of working in Detroit.

Her geometric designs and vividly-hued work gives an undeniable energy to any space it inhabits. She cites inspiration from Elsworth Kelly, Miles Davis, Art Deco architecture, shadows that are cast through venetian blinds, playgrounds, techno music and long bike rides. Her perfect day includes working in the studio with friends and fellow artists, explaining the necessity for collaboration and enthusiasm to experiment is what makes Detroit thrive. 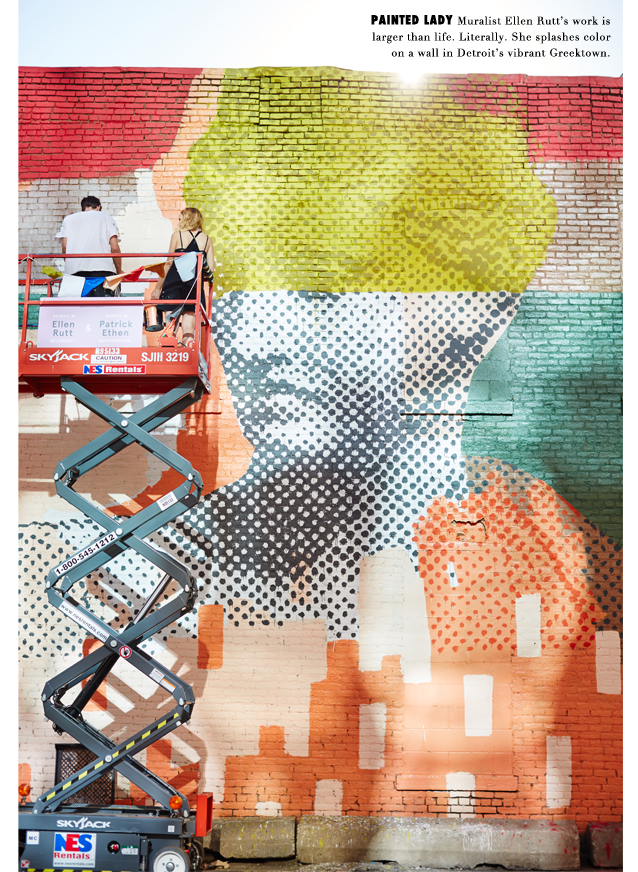 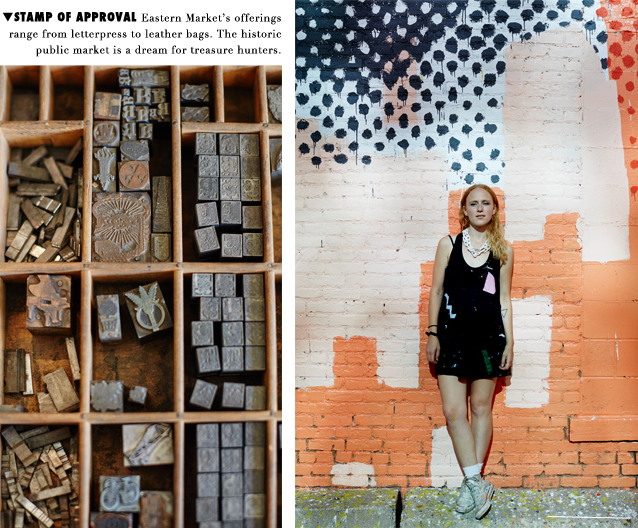 Both Ellen and Signal Return are set up in the Eastern Market, a historical commercial district within the city. On Saturdays, you’ll find the area bustling with creators that set up shop for one of the country’s largest year-round markets. You’ll also find original gems from Salt & Cedar, a letterpress shop with original works and a rare craft collection. SOUQ Studio is a cooperative featuring Detroit Rose candles that bring a modern edge to small-batch candles, and beautiful leather bags by craftswoman Danielle Karmo. Orleans + Winder is another great jaunt within Eastern Market full of deconstructed black and white garments along with contemporary home objects.