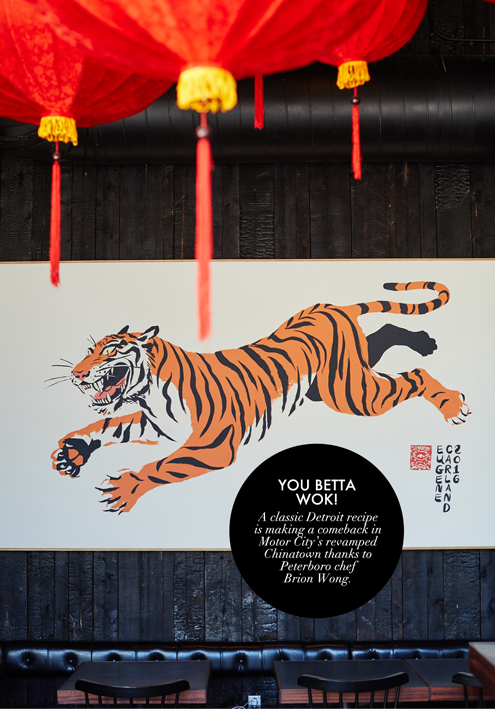 Chef Brion Wong humbling declares he’s only cooking, but his Chinese-American comfort food is rekindling a forgotten historical district in Detroit. THE PETERBORO opened its door for business this past spring at the corner of Cass and Peterboro, which marks the heart of Detroit’s long-gone Chinatown. We’re giving you a peek inside the kitchen as Chef Brion prepares a house favorite that you can only find at this newly seasoned Detroit jaunt: Almond Boneless Chicken.

For a large American city, Detroit is surprisingly void of any Chinese cuisine. The last authentic cantonese restaurant in Detroit’s Chinatown, Chung’s, shuttered it’s doors in 2000 after 40 years of business. The Peterboro menu definitely reimagines the Chinese-American dishes that we all know and love, but advocates much-needed energy to the historical neighborhood. Plus, a savvy design leaves hipsters salivating not just because of Chef Brion’s cuisine. Originally from New York, Brion brings his restaurant experience and his multi-cultural upbringing to invigorate Asian-inspired dishes for a city—and neighborhood!—sorely lacking in this cultural fare.

With illuminated red lanterns and thematic tiger mural, the conspicuous details make the Peterboro the perfect cornerstone to a possible Chinatown resurgence. Their umbrella-adorned outdoor patio makes it a memorable spot for delicious eats and killer cocktails when you’re visiting the Motor City. Watch as we cook up Almond Boneless Chicken with Chef Brion as he talks about reconnecting with the roots and community of Detroit’s forgotten Chinatown.