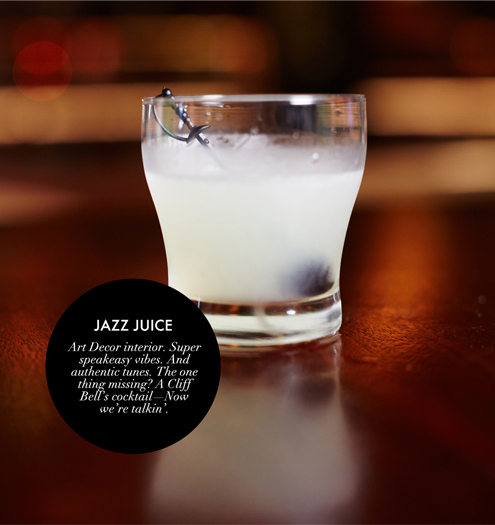 CLIFF BELL’S is a portal into another dimension. The historic Detroit jazz club on Park Avenue is adorned with a mahogany and brass facade that transcends its 1935 opening. As one of the oldest clubs in Detroit, Cliff Bell’s features Art Deco decor, mirrored walls, vaulted ceilings and perfect mood lighting for the most authentic speakeasy vibes you can get. Their cocktail menu boasts an impressive list of shaken and stirred cocktails that pay homage to the history of Cliff Bell’s and celebrate the city of Detroit. We’re getting into the spirit of the Motor City with a gin-cocktail recipe reminiscent of the prohibition era.

Cliff Bell’s is named after John Clifford Bell, an entrepreneur who finally opened the luxurious lounge of his dreams at the end of the prohibition era. The club thrived for many decades, but eventually closed in 1985. About 30 years later, Paul Howard, Scott Lowell and Carolyn Howard restored and reopened Cliff Bell’s in 2005. Reviving this Detroit mainstay created a forum for the jazz community of Detroit to thrive. Live music plays every night of the week at Cliff’s including local favorites Ben Sharkey, Melvin Davis and Marcus Elliot.

We love how Cliff Bell’s serves as a community anchor, not just a place of business. It’s commitment to the character of Detroit is what makes this rebounding city kind, creative and resilient. Now tune in to shake up The Final Word, a gin-based favorite at this local Detroit institution. Follow the recipe to make your own at home, and throw on some buttery jazz tunes and transport yourself to a laid back, moody speakeasy in your own abode.