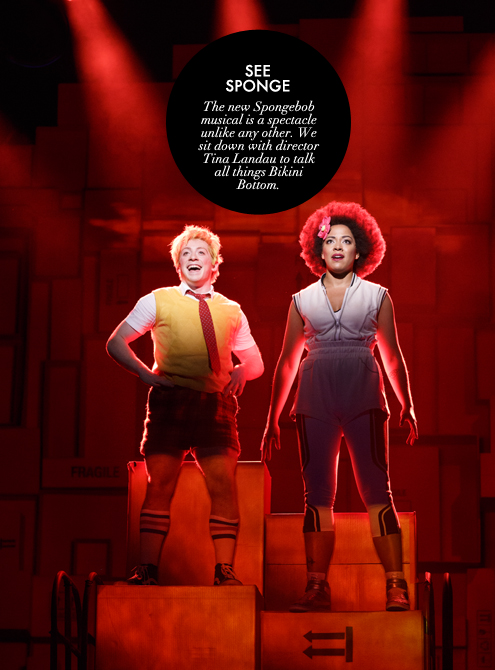 Who lives in a pineapple under the sea? A catch phrase as iconic as this is scarcely found outside of your TV set during Nickelodeon’s late 90’s cult classic cartoon SpongeBob Squarepants. But the contagiously silly sea sponge is swimming from small screen to the Great White Way—and making quite the splash along the way! The unapologetic musical spectacle takes center stage with a pre-Broadway engagement in Chicago this summer. THE SPONGEBOB MUSICAL celebrates friendship and determination, and along the way, theater goers are treated to a show of epic proportions. And a whole lot of spongey sweet heart.

Leading the all-star team to really great depths is co-conceiver and director Tina Landau, the acclaimed Steppenwolf ensemble member whose enigmatic work is touted for its brave and bold explorations of large-scale musical pieces. The SpongeBob Musical is a brilliant peacock feather for her cap—or in this case, maybe something more akin to a parrot fish.

HEAR ABOUT THE MUSICAL FROM TINA LANDAU >>

We sit down with Tina to talk all things SpongeBob. From initial conception when she pitched her concept to Nickelodeon—eight years ago!—to watching the curtain rise on Bikini Bottom earlier this summer, she opens up about the message behind the musical. (Oh, and the amusing fact that she has amassed quite the array of Spongebob paraphernalia). Alongside the Fun Home and Spring Awakening design pros and Grammy award wining artists like Cyndi Lauper and David Bowie who developed the songs, Tina crafted an energetic show that lives within the acclaimed TV program but has added such charm, sparkle and talent to the experience. Regardless of your level of SpongeBob fandom, you’re bond to walk away reeling with unadulterated, you-don’t-want-to-come-up-for-air joy.

THE SPONGEBOB MUSICAL plays through Sunday, July 10th at the Oriental Theatre. Tickets $32-$87 available at BroadwayinChicago.com. Visit TheSpongeBobMusical.com to follow its journey to Broadway.