We’re kicking off a new season featuring 10 unique movers & shakers that are shaping their respective industries in inspiring ways. Unique may not even begin to describe this super group, but each of these dudes are diving head first into their particular passions and making their voices heard. Their innovative and tactful approach to daily mantras and business endeavors—and everything in between!—truly represent how creativity and business are never mutually exclusive. They remind us that success is not necessarily an end goal, but a shape-shifting way of life.

What does it mean to be truly unique and have the seemingly elusive ‘Je ne sais quoi’?

You definitely won’t find that answer here, but we can only hope these fellas inspire you to think about what success really means and decide if that big moment you’re waiting for really matters. Be it on stage, a startup or a successful restaurant spanning multiple decades, each flips the status quo on its head to rethink the norms to better the world outside their industries and within themselves—and have a freakin’ blast while doing it. >> 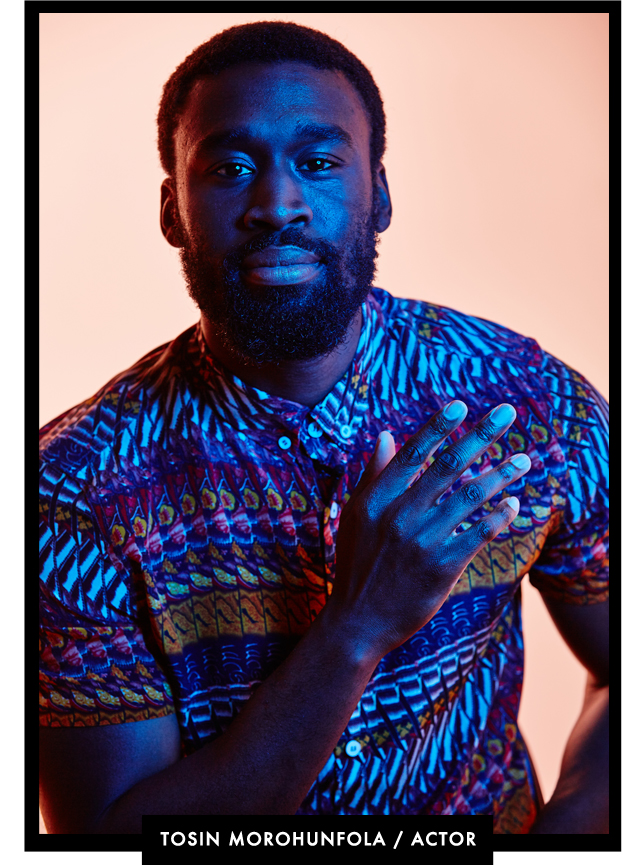 TOSIN MOROHUNFOLA is using his voice—literally!—to examine racial progress, class, faith, gender politics, family and everything in between. As a slam poet, actor and director, Tosin expresses his personal experiences in everything he creates. As a first-generation Nigerian immigrant who grew up in the church, raised in the Midwest, and nurtured by parents who are doctors and social workers, he uses poetry, in particular, as an art form to explore the self and the community. Tosin recently finished directing the film On Sight, a passion project and direct response to the killings of unarmed young black men.

“I had grown tired of feeling powerless to it all, watching the death count rise. I think a lot of us felt, and still feel that way. Unsafe, too. So I met with some friends and said we have to make something. Something that addresses this government-funded legacy of violence.”

Tosin describes the film as a thriller about the relationship between police and civilians, and the seduction of suspicion armed with unbridled power. On Sight premieres at the Kansas City Film Festival next month, and will be free online later in the year. We continue to be inspired by Tosin’s creative visions to give voice to the voiceless. 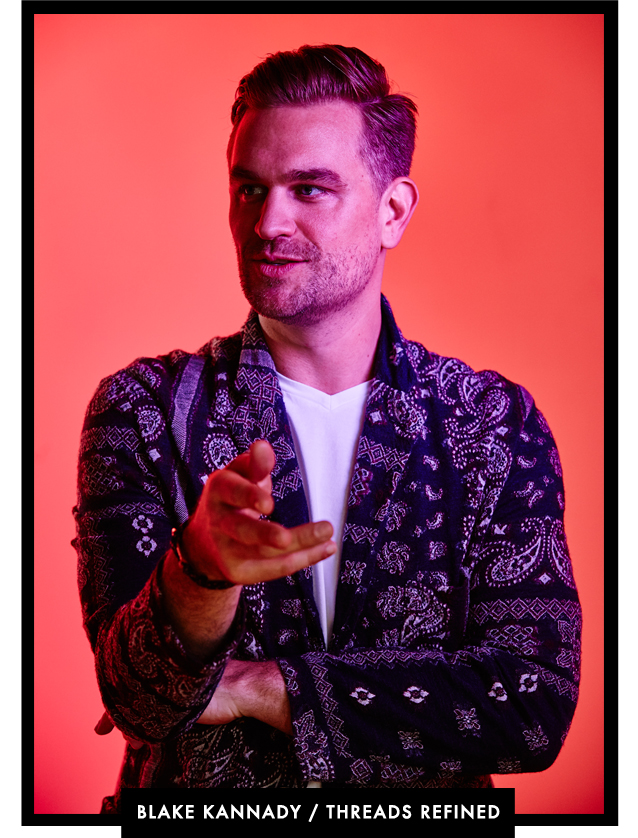 Style and fashion ain’t easy. It can be this confusing, ever-changing landscape void of any navigation. And that’s why we’re swooning over BLAKE KANNADY, Financier by day and THREADSREFINED Stylist by night, he’s making the art of dressing a little easier and more accessible for the wardrobe-challenged. ThreadsRefined is an app that’s an on-demand style companion that can solve any fashion, styling or shopping need through virtual or in-person consulting. Blake explains that it’s really about bringing your perspective and ideologies to life visually, where you’re at in this place and time and where you hope to go.

“We are influenced by the past and where we’ve come from. Now the question: What is available on the style front to help us bring new ideas to fruition and how will our style help us move forward.”

This sharp-dressed man may be working personal finance by day, but his aspirational mantra of style and confidence is 24/7. We rounded up a few of Blake’s style commandments to blossom our visual personalities this Spring season: Just say no to things that don’t fit. A shoeshine will probably make you feel better. Yes, spend the money on shoes. Never underestimate the influence style has on your life, and don’t be afraid to splurge once in awhile. 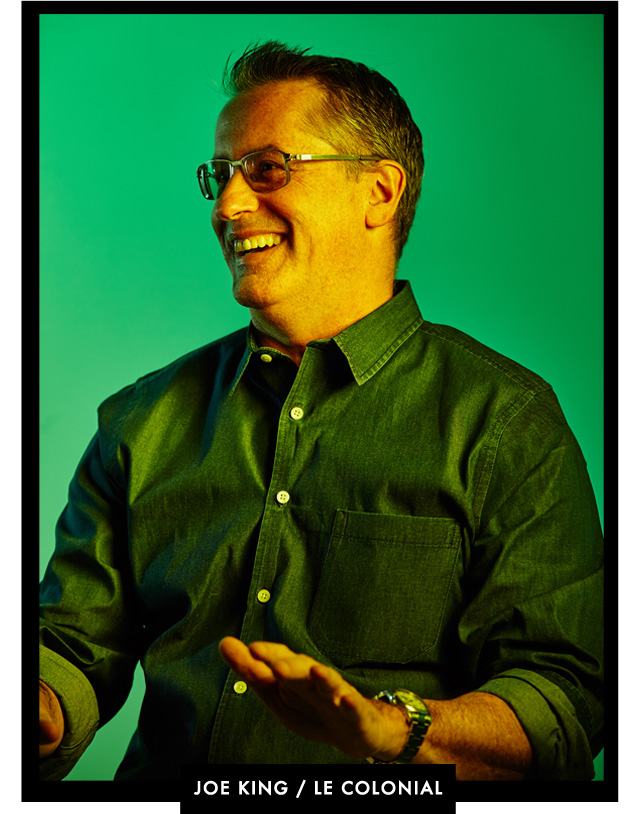 One of our favorite Chicago jaunts is turning 20 this year and we couldn’t help but celebrate the man behind it all. With no Vietnamese restaurants and barely any Asian restaurants in sight, JOE KING opened LE COLONIAL in the heart of the Gold Coast in 1996. You could even say Joe opened the culinary doors and introduced the city to the exotic world of French Indochina. This classic restaurant has managed to stay true to its French Vietnamese roots and grow successfully into three—going on four!—locations. Dubbed an oasis by many customers, Le Colonial continues to surprise and delight with all the right details to transport you into another world.

Fashioned after a 1920’s Saigon brownstone, the interior of Le Colonial is reminiscent of that period in every detail. But even with stunning interior, Joe knows it takes so much more to keep the spirit alive for 20 years and beyond. Service, service and more service with a nice dose of recognition, Joe explains. He says the key is to recognize what people really want because it’s ultimately synonymous with what you want. 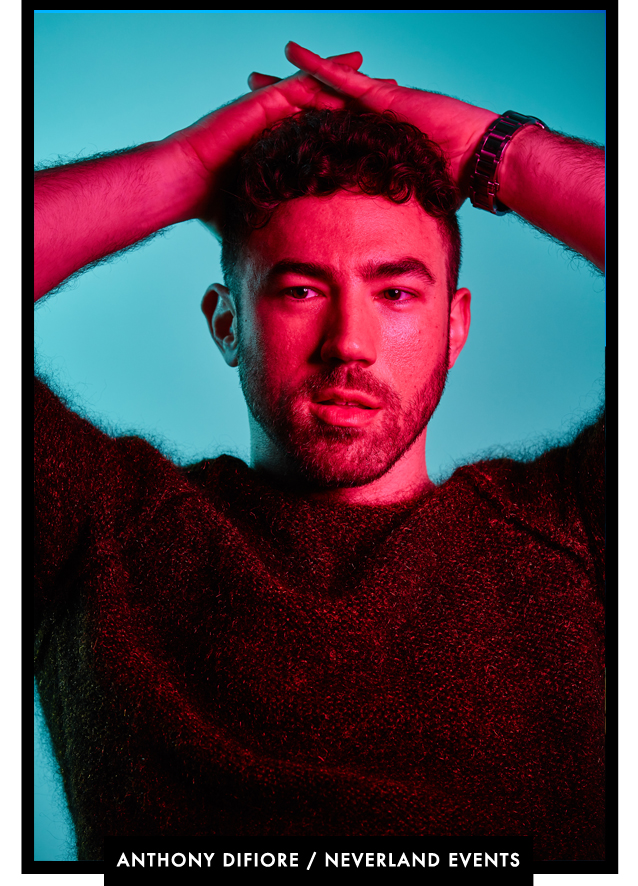 ANTHONY DIFIORE has a serious knack for bringing people together, transforming a space and creating a kick-ass vibe all in the name of fun. As Co-Owner and Creative Director of NEVERLAND EVENTS, Anthony’s goal since the very beginning was to diversify the LGBTQ nightlife scene—bringing different kinds of people together, regardless of gender, identity, age, size and shape. The Neverland team prides itself on a passion for creating art, and whether it’s costumes, theatrical sets, or videography, they’re transforming the gay party industry into a unique, inclusive dreamland.

“There’s this idea communicated by the generation above mine that the gay dance party was dead. Apps like Grindr and Scruff gave men a reason to stay home and look for sex rather than seek it at a social event. When we started Neverland, there was this pervasive cynicism that we were trying to revive an industry that would never come back to life.”

Anthony’s work landed him a gig with Chicago House and Social Service Agency on a LGBTQ anti-poverty campaign called Proud2Share, which raises money to help the most vulnerable members of the LGBTQ community. He hopes to dissolve the illusion of a flashy gay community to reveal the truth in its diversity and complexities. And for a man who has a big heart and knows how to have a lot of fun, we couldn’t help but ask the ultimate party faux paus. His answer? Never stop the music. 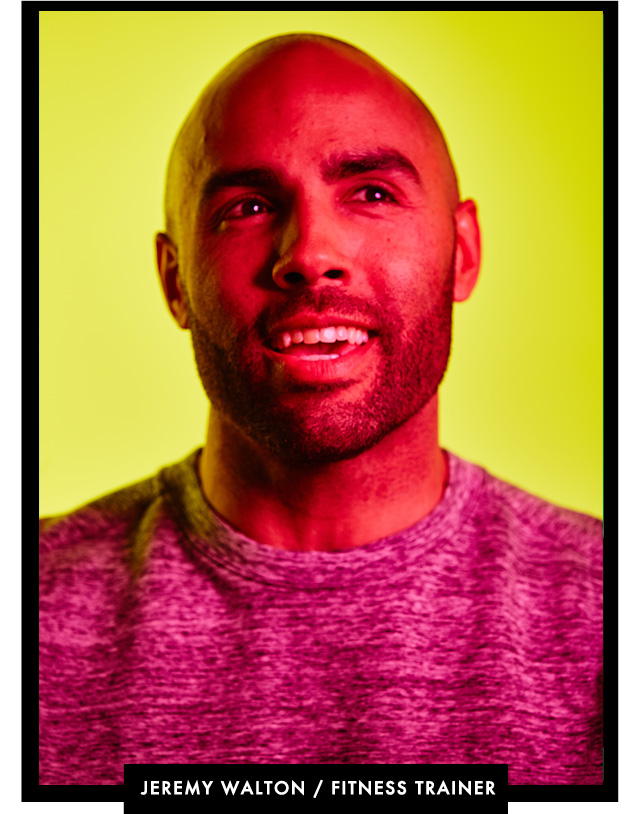 He’s called the Jedi. And although it may not be the dark force he’s battling, JEREMY WALTON channels a sense of spirituality, balance and knowledge-is-power mentality to his art of fitness. Jeremy brings a refreshing and pragmatic mantra to his work (and workouts!) as Co-Director of Training at SHRED415 and through his 14 years of PERSONAL TRAINING. He focuses on the importance of consistency and progress of movement, but notes goals are simply milestones in a life long responsibility of movement.

“Everyone has some level of struggle. And watching a person get stronger within themselves physically and mentally, then watching that strength transition to the life they live is what makes progress such an important goal to have for ourselves.”

Even though our society is constantly bombarded by the latest and greatest fitness trends, Jeremy says to always remember where you are and where you want to go, and then you can find different training methods to support your direction. And just when we thought we couldn’t love Jeremy anymore, he set the record straight that compulsive crunches do not yield a six pack. We love the fitness zen that Jeremy is serving up and next time we break a sweat we’ll definitely be channelling our inner Jedi.

Chef GAETANO DIBENEDETTO has been in the kitchen since 1978. After bringing traditional Italian cooking to the states, Gaetano realized that the majority of American’s actually expected Italian American classics when dining. He decided to pair his culinary expertise and creative spirit proposing a new kitchen and new style of cooking—a fusion of traditional Italian dishes reinterpreted with a modern edge. Think panna cotta with a savory twist!

Gaetano’s real passion and unique perspectives come through in all the details and thoughtful nuances of Italian cooking and dining. He builds each dish and meal with the purpose of nourishing the body in the most enjoyable way—an experience of progression tailored to satiate and delight.

As part of the Italian American Chamber of Commerce Truly Italian initiative, Gaetano is sharing his love and knowledge of Italian cuisine by educating consumers about truly Italian-made products. Important things like never buying pre-grated cheese. And there’s nothing Italian about “Italian” salad dressing. Learn more on distinguishing authentic products from Italian sounding imitators at this two-day Italian food and wine tradeshow May 18 and 19. 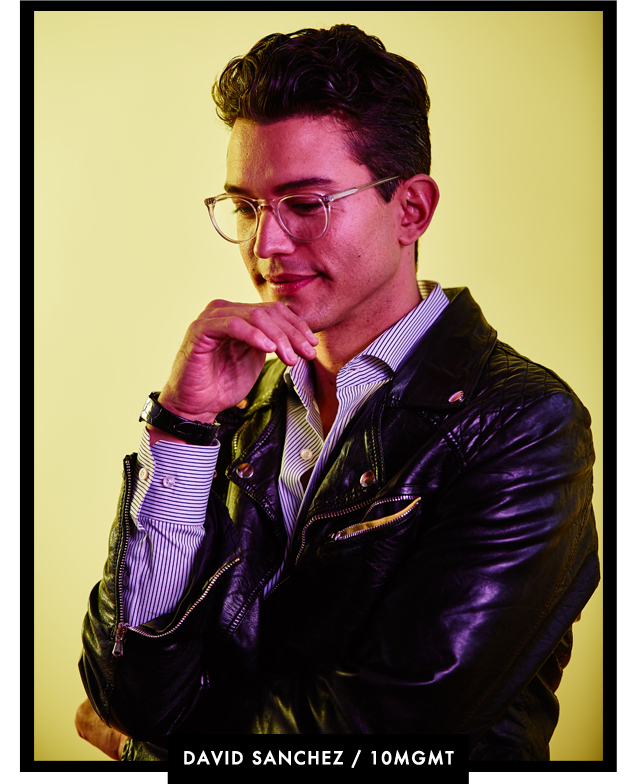 Model-turned-agent DAVID SANCHEZ is changing the face of talent representation through a deep understanding and hand-ons approach of artist development, helping each and every client find their voice within the industry. With experience both in front of and behind the camera, David saw that the one-dimensional modeling and talent industry was due for a change. He founded 10 MGMT to create an agency that really listened to the needs and passions of his clients, in turn, creating successful career paths for burgeoning talent to thrive in. David’s down-to-earth personality comes through in every facet of his business. He explains, when talent is signed with 10 MGMT they’re part of his family, not just a pretty face on the board.

“I’ve seen it all: the good, bad and ugly. This is a very personal industry. We’re dealing with someone’s image, work and money, so inevitably shit will hit the fan and it’s in those moments that you see people’s real character.”

David says he’s always trying to listen harder, learn as much as he can and never stop asking why. His entrepreneurial spirit is oh so inspiring, and his love for people and talent is clearly undeniable. Beyond the walls of 10 MGMT, David is sharing his altruistic spirit teaching Entrepreneurship at Columbia College Chicago and celebrating his 6th year leading the Pedersen-McCormick Fashion Club for the Boys & Girls Club. 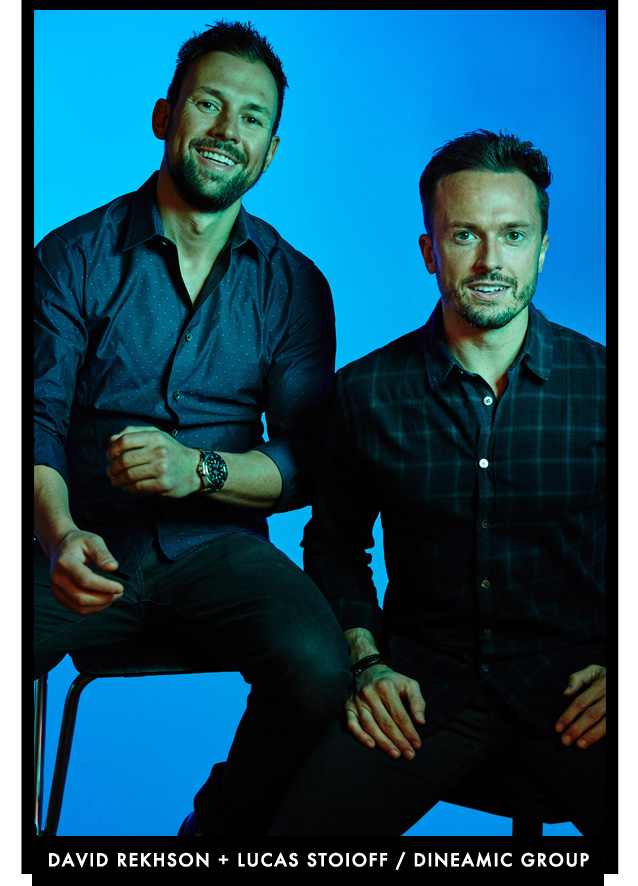 DAVID REKHSON + LUCAS STOIOFF are the brainpower behind Chicago concepts like Bull & Bear, Siena Tavern, Bar Siena and several others. The two founded DINEAMIC GROUP as a hospitality development and management company, growing it into a hospitality powerhouse of almost 1,000 employees. Whether it’s an upscale steakhouse or a high-energy Italian restaurant, they build all of their projects to be approachable yet remarkable, and appeal to a wide demographic.

And as Luke and David watched their business and dreams grow, they surrounded themselves with a team to share it with. They explain many employees started in hourly positions and are now running major facets of the business. Their humble and energetic mantras are no doubt the key to their success, and their ability to cultivate a team to watch them grow and achieve their dreams is a special quality we can all try to bring into our culture of growth. 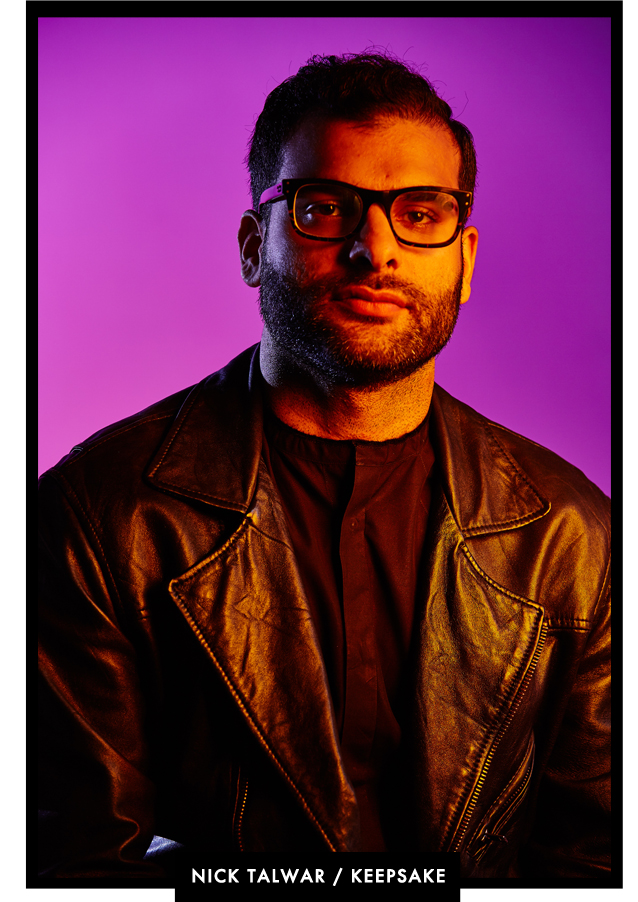 After coming back from a trip with friends, NICK TALWAR was trying to send someone a bunch of photos of the memorable weekend and found it incredibly difficult. He could have sent them one-by-one, hooked up to his laptop or placed them on Facebook, each optioned more disorganized and frustrating than the next. Nick saw the void and created an alternative, KEEPSAKE. Keepsake is an app that allows the user full control over how their moments–photos and all–are kept or sent. And more importantly, Keepsake is helping protect your moments in the future and keep ownership over them.

“Keepsake is more like our art, a movement around emphasizing individual creativity and rights for the next generation of expression, which will be completely digital. We hope our perspective will cause all companies to be more mindful of preserving individual rights to content, which is really expression.”

Nick moved to Chicago in 2014 to not only finish building the app, but build a community. He’s pulled together students from UIC, Columbia, Loyola and DePaul to help complete construction and design of Keepsake in a grassroots collaboration. Keep an eye out for the public launch of Keepsake and get ready to experience the fastest way to capture a moment exactly as you saw it, allowing infinite memories without limits.