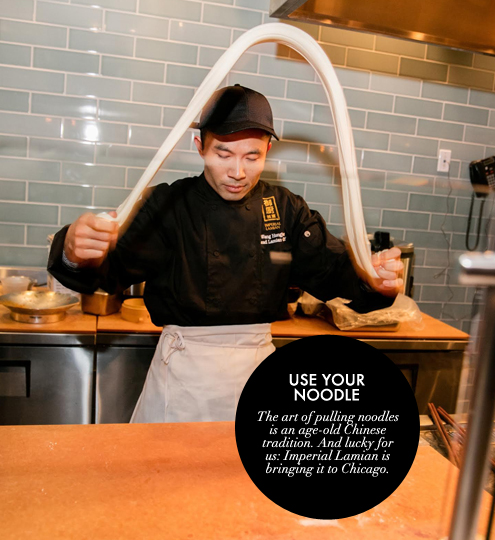 Noodle crazy? Look no further than the newest outpost of Chinese cool: Imperial Lamian. And forget the ramen craze—we’ve got a new noodle in town that definitely should be on your food radar. Lamian—which literally means “pulled noodle”—originated in China in the 16th century and these delicious delicacies are slurped up in soups of varying broths or wok-fried to perfection. The process seems simple enough: start with a lump of dough. Twist it. Stretch it. Slap it. And then miraculously watch it pulled into even, meticulously measured noodles. In your dreams, you can pull the most perfect noodles. In reality, though, this is the farthest thing from the truth. Just ask Master Chef Wang Jun, Imperial Lamian’s executive Lamian chef. Yes—there is so much art to the act of pulling noodles, that the new River North restaurant dedicates an executive chef exclusively to it. Growing up in the neighborhood of Lanchow, China, Chef Wang has been eating lamian his whole life—and after graduating high school, went on to pursue the art form more seriously. But like any serious discipline, the journey is always continuing.

“An old Chinese saying states that there is no end in the learning process. We all have to continue learning and improving,” So says the master chef who produces—in record time!—delicately pulled noodles that look like something from the jewelry counter at Saks Fifth Avenue. But the work is strenuous and fickle. Chef Wong periodically slams the noodles against the countertop to ensure even thickness. He knows exactly how and when to pull the dough. We were so intrigued by the noodle show that we decided to step into the Imperial Lamian kitchen to try our hands at it, too. The result? Broken noodles apparently don’t pass muster.

SOMEONE’S IN THE KITCHEN WITH IMPERIAL LAMIAN >>

Once noodles are prepped, Executive Chef Kok Lam Andy Foo has a smorgasbord of Southest Asian delights to which the lamian are a perfect pair. The most mouthwatering? Minced pork in a spicy pork broth with black garlic, truffle oil and mushroom. Now that’s what we call using your noodle.