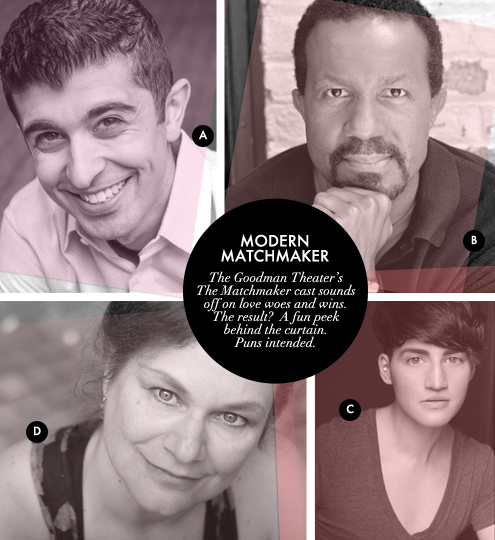 Love it or hate it, Valentine’s Day is right around the corner. The February holiday is a divisive one: some lucky lovers canoodling with their craft cocktails and movie nights; the other side, well, it’s not as amorous. The Goodman Theatre is setting out to romanticize the single life in The Matchmaker, a jolly 1955 classic which set the foundation for the Broadway musical Hello, Dolly! (and you know how much we love musicals). The Thornton Wilder play mashes up curmudgeon widower Horace Vandergelder with larger-than-life matchmaker Dolly Levi and all the wacky and wild mishaps that happen in pursuit of L-O-V-E. In 2016, the idea of an old-fashioned matchmaker seems antiquated, but with a recent study by WalletHub ranking Chicago as one of the worst cities to be single—we came in a whopping 133 out of 150!—maybe some old fashioned love potion number nine isn’t the worst we could try.

We turned off Tinder, Grindr and any of our other dating apps ending in -er sounds, and instead turned to The Goodman’s The Matchmaker cast who are currently in rehearsal for the jovial play in hopes of getting some solid dating advice (and a little more info on the characters they play in the process). What we found? The Good, The Bad and The Sultry!

Worst dating experience?
It was a blind date via Tinder and we were talking about the fact that we both have family in India. We found out that we knew a few of the same people and went to the same wedding when we were younger. Thanks to Facebook, we found out we were cousins and we clearly weren’t going forward with this.

Have dating apps ruined the art of conversation?
I don’t have negative attitudes towards technology. It takes a certain skill to be witty and to show personality through apps. Honestly, I don’t think people were talking more before apps. Everyone was in their own world. Plus the goal of dating apps is to eventually meet up!

ALLEN GILMORE (B)
Role: Horace Vandergelder, the wealthy widow with a chip on his shoulder
Relationship Status: Single (“but lookin'”, he says)

Biggest dating pet peeves?
SHOW UP! I’ve been stood up before.

Best pick-up lines?
I don’t go in for “lines.” They cause enough anxiety in my professional life. If I want to say something to somebody I don’t know, I usually just say it. But then again, I’ve got no game.

Perks to single life?
Well, there aren’t any compromises. I don’t have to watch someone else’s tv shows!

SYDNEY GERMAINE (C)
Role: Minnie Fay, the hopeless romantic on the quest for love
Relationship Status: In A Relationship

Best dating experience?
Definitely my current relationship; in each relationship I mature and I’ve finally realized that love isn’t just a flighty bubbly thing; it requires hard work to keep the good fires burning and the angry fighty fires at bay.  I say ‘fire’ because we’re both Aries. This relationship has made me realize that finally, I’m adulting.

Have dating apps ruined our dating culture?
Not completely, but it definitely lacks human interaction (I’m an actor; of course I prefer doing things in-person!) and that’s really important. I’d rather run into someone on the street or make eye contact on the subway. However… Sometimes it is useful for a particular kind of flirtation. You can be mysterious in ways you can’t be in person.

What is the best advice you’ve received on dating?
You have to be 100% honest. Not 99.9%–and there is a big difference between the two.

Best date?
That would have to be the night of New Years Eve 1985. I sang at the Improv and the Duplex (NYC), then we went up to Les Tuilleries to hear Ann Hampton Callaway’s last set and to hang out with her a while, and then, while waiting in front of the Plaza Hotel for a “free” New Years Eve bus that never came, we decided to get married. And we did so the following November.

What is the one thing that you love your partner doing?
Well, there are many things that would work for me. But with us, it’s them making dinner. That pretty much is a deal-sealer. Especially when they are a great cook!

Any advice you received early on about dating?
Be more interested in what the other person has to say than in what you have to say. In other words: Listen.

When you were dating, how did you shake first date jitters?
I never did shake them!

The Matchmaker runs March 5th—April 10th on the Albert Stage at The Goodman Theatre, 170 N. Dearborn. Tickets start at $25 and available by visiting GoodmanTheatre.org/Matchmaker.