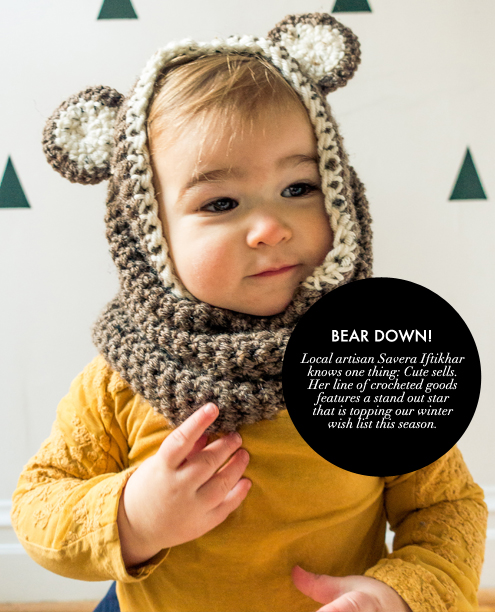 It feels so right to be knotty sometimes, so we’re talking with the woman behind the cutest crochets we ever did see. Savvy Stuff’s etsy shop features cuddly creations and unique jewelry, but we’re totally hooked on the adorable bearcowls—handmade and warm enough for even a Chicago winter! As a self-taught crocheter, Savera Iftikhar never learned to read or write crochet patterns. Instead of a hinderance, this lead to many imaginative ideas and creations, including the ewok-esque bearcowl.

Here at G&F we’re all about a little surprise and delight. We’re also the glass-half-full type. So when we heard about Savvy Stuff’s charming knitwear to beat the winter blues in style, we had to find out a little more. Read on to to see what animal cowl Savvy Shop is going to whip stitch up next and other inspirations behind this local Etsy shop.

What inspired your bearcowl creation?
Savera: I have tons of friends who have children and their kids were always pulling hats off their head, leaving them cold. So this idea came to mind to make a cowl that would keep their heads warm and be much harder to yank off. I thought I could add bear ears to make it even cuter. I mean who doesn’t love a little chubby bear? Except Antarctica, I’ve actually sold and shipped bearcowls to every continent!

Any other animals in the works?
As much as I love my bearcowls, I think it’s time to expand to other animals. A customer ordered a custom lioncowl for her son once and recently I’ve been asked to make a fox, so I think I’ll try my hand at a few others. But, the original bears will always be my favorite!

Are you a kid at heart?
I am a total kid at heart. It probably helps that I look younger than I am—no one has ever guessed my age correctly. I am a forever fan of Winnie the Pooh and maybe he was why I made a bearcowl as opposed to a foxcowl or a bunnycowl?

Favorite too-cold-to-work activities in Chicago?
I love watching movies so by far my favorite cold day activity is going to the theater with a good friend. If it’s too cold to even get there, I’ll keep warm at home crocheting with some Netflix! Cold weather comfort food = Lou Malnati’s pizza.