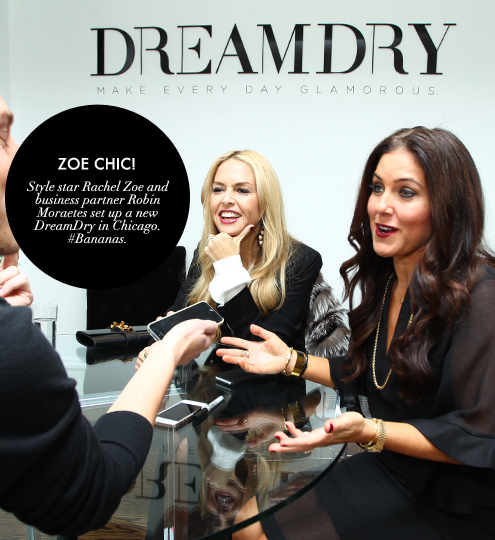 Synonymous for all things style, Rachel Zoe has rolled into town setting up the latest incarnation of one of her fashionable businesses: DreamDry Salon. Chicago is the lucky home to the third DreamDry location—two are constantly booked solid in NYC—and the brand has cozied up on Armitage Avenue in a chicly appointed space. We mean: Did you expect anything less?

While in town, Rachel and business partner Robin Moraetes put the finishing details on the new beauty outpost. From crazy beautiful mirrors to swoon-worthy lighting fixtures—and the sweetest staff you’ll ever encounter—DreamDry is a glam girl’s haven for getting an efficient, well-priced service from a staff that is trained to know the trends. That’s the goal of DreamDry: super glam for a fraction of the cost. We like the way Robin and Rachel think.

The dynamic pair—whose mains could obviously not have looked any more chic—sat down with G&F’s creative director to talk the ultimate blowout, the perfect Holiday look and horrible hair memories they’d rather forget. >>

G&F: With two NYC salons, why Chicago next?

Robin: The women in Chicago are so style savvy. And we want to bring everyday glamor to the city and create better efficiencies for an affordable luxury every day.

Rachel: And DreamDry is for women who are on the go all the time and need to look good. And don’t have two hours to do it themselves. Me attempting to do my own hair takes me a year. The mantra of the business is having that $500 experience without spending that. People get addicted. And that’s not a bad problem for us to have.

G&F: But opening in Chicago in December seems a little risky!

Rachel: But I love winter style so much. I just love coats. I can make an argument for any coat.

G&F: Since it’s the Holidays, what’s on trend for the season?

Robin: One of the most popular hairstyles is the Audrey.

Rachel: And that’s never going to change. It’s always going to be the Audrey. Who doesn’t want to be Audrey Hepburn, right?

Robin: It’s one of the first styles we launched and we focus a lot on it for Holiday. It’s a big bad bun on your head! But I have to say, the ladies of Chicago are loving the Stevie. And we’re both rocking a version of the Stevie today. I’m doing Stevie neat.

Robin: They come in and get the Stevie neat and two days later it’s the Stevie undone. It’s the blowout that lasts three days 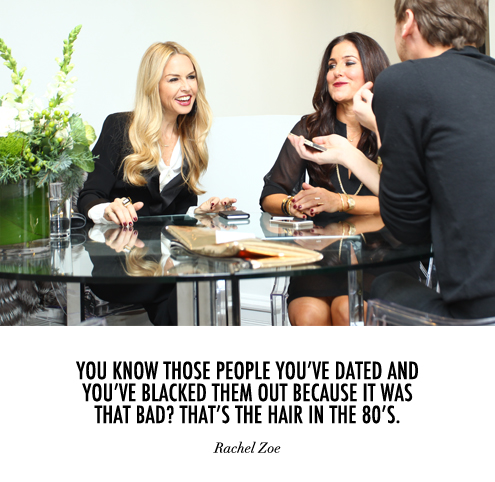 G&F: And on your Holiday wishlist?

Rachel: The Little Black Box. It looks like the chicest coffee table book you’ve ever seen but it has everything you need to have the sickest blow dry at home. And it comes with a turban. You could rock a turban.

Rachel: I believe in a turban. Who doesn’t love a good Turban?

Rachel: Well, that’s the problem. You kind of think it looks really good inside. And when you walk outside, people might think “Rachel Zoe has lost her mind.”

Robin: But at least her hair’s dry! It took us a long time to develop all of the technology in this box. The Dream Dryer is the quickest and quietest blowout you will ever get. There’s 85 miles per hour of air coming out of this sucker. She is not going to let you down. She has a ten and a half foot chord. And a silencer! This is a serious piece of art. We have a Dream Detangler in here, too. Rachel has a collection because she steals them every time she comes over because she loves them so much.

Rachel: I admit it: I do. It doesn’t break your heart and you use it wet. They are so awesome. Everyone wants one. Mine always get stolen!

G&F: And for two women on the top of the hair game, you had to start somewhere. Worst hair moments?

Rachel: Erase the 80’s. Can’t even talk about it. I’ve blocked it out. I’m thinking about it and I can’t even go there. You know those people you’ve dated and you’ve blacked them out because it was that bad? That’s the hair in the 80’s. Madonna looked great in Lucky Star, but she was the only one.

G&F: So is it safe to say that there will be no 80’s hair going on in DreamDry then?

Robin: Unless it’s for Halloween.