We’re celebrating all things local this issue. Okay, we’re always celebrating local like our story featuring five of our favorite Chicago design stars, but back that lens up a bit and there’s a whole lot more happening right now in this big city of ours to talk about. Take, for instance, the award winning Goodman Theatre that just embarked on their 90th season, opening with the heart-wrenchingly sincere Smokefall as well as The World of Extreme Happiness. The latter tells the story of a hopelessly romantic factory girl gaining control over her life amongst China’s economic transformation. Sounds a little heavy, yes. But the result is a playful, powerful and urban exploration of finding oneself amidst cultural pressures. And smack dab in the middle of it all is actress Jennifer Lim who plays the leading lady, Sunny. 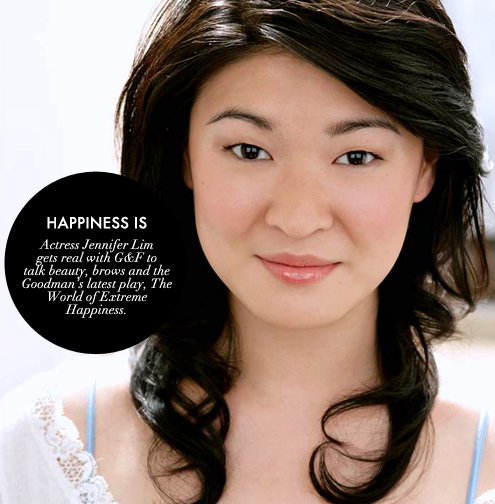 Her resume is off the charts cool with her biggest role to date in 2011’s Chinglish where she earned a Jeff nomination as well as Theatre World award for the Broadway debut. But it’s Jennifer’s down-to-earth attitude that makes this NY-based actress a real star. We catch up with the theatre lover—and leave all the drama for the stage!—before curtain to talk misshaped brows, what’s in her beauty bag and her Chicago love list. >>

First off: You’ve got bangin’ brows. Any tips?
Ha! It’s funny you say that because I got into so much trouble when I first had my brows tweezed at age 18. I was having headshots taken and the makeup artist asked if she could shape my brows. Growing up, I always thought they were too bushy so I gave her the go ahead. When I got home after the shoot, my mother flipped and I got a big scolding for forever ruining my perfectly full brows. Nowadays, I just tweeze the stray hairs and pretty much leave it alone. Though my mother still insists they’re nowhere near as nice as when I was growing up.

What’s the most intense stage makeup face you’ve had to put on for a part?
The final scene of this show is probably the most intense stage makeup I’ve ever had to do. The physical transformation my character undergoes is so important in that scene, that it took a while to figure out what looked the most effective. Of course, we only have something like 3 minutes to slap it all on because of the quick-change, so that’s pretty intense too! 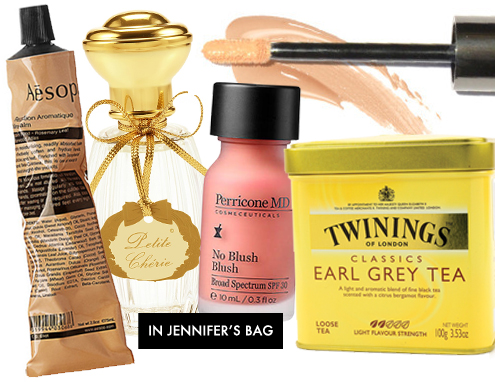 What’s in your beauty bag?
I’m currently obsessed with Perricone MD’s No Makeup line and have their No Foundation Foundation, No Concealer Concealer and No Blush Blush in my makeup bag. I don’t go anywhere without hand cream and lip balm: Aesop Resurrection hand balm and Aquaphor healing ointment are the two in there now. A small bottle of my favorite perfume: Annick Goutal’s Petite Cherie. And finally Twinings Earl Grey teabags. That’s my go-to comfort drink.

Chicago is happy to welcome you for the run. Any new city favorites?
Chef Christopher Sullivan, who worked at Blackbird and Avec for 10 years before opening this lovely cafe inside the Ikram Store, is a friend of my boyfriend’s so I went to check it out. It’s a gem of a spot for lunch or a bite in the afternoon. I liked it so much I went back two more times!

The David Bowie Is exhibit at the MCA. I didn’t know much about him and was amazed to learn what an incredible artist he is. So ahead of his time and truly inspirational.

King Spa and Sauna is a bit of a trek to get to without a car from where I’m staying, but it’s so worth it. I’m half-Korean so any chance to hit up a legit Korean bath house, I’m there.

Catch Jennifer in The World of Extreme Happiness, playing through October 12th at The Goodman Theatre. Buy tickets and get more information at GoodmanTheatre.org.