Even though Jana Kinsman has been illustrating her whole life, the idea for Doodlebooth illuminated while sipping mimosas and drawing friends at a Christmas party—we knew we loved mimosas for a reason! We sit down and chat with the artist about her 4-year-old portraiture service, Doodlebooth. Not only did we see Jana in action during our interview, but we had her transform our closest friends into an army of doodle people at our G&F BFF Dinner. Not many people can capture a person’s essence quite like Jana, but the process seems sweetly simple. She tells us that her portraitures always begin with the face shape and smile. The rest is pure doodle magic. 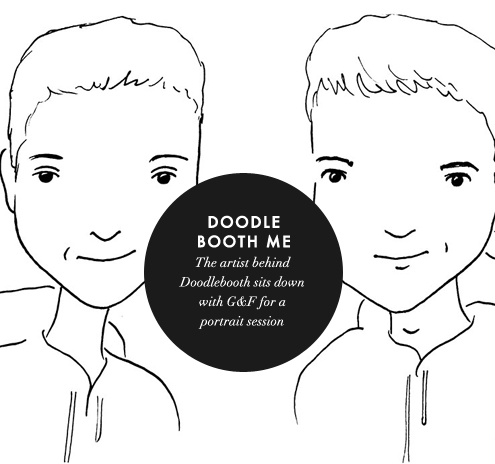 “I once drew a woman who just lost her hair from cancer treatments,” Jana explains her most memorable sitting. “She had me draw her bald, it was the first time she went bald in public! It was an honor and a very special moment.”

Jana offers her uniquely adorable service for private parties, events and beyond. Doodlebooth can be reimagined in many forms, the most unique way it has come to life is through CB2’s Oliver plate series.

“For the past two years I did Doodlebooths at CB2 stores as a holiday promotion, along with the Oliver plates. It’s smart to see CB2 connect an artist with their audience, it makes the retail world so much more magical.”

And when Jana isn’t illustrating those around her, you can find her bicycling to her family of bees throughout gardens in Chicago. We featured Bike-A-Bee on G&F in August 2012 to show readers how Jana created an initiative to promote beekeeping by bicycle—watch the throwback video here! From bees to bikes to doodles, we love Jana’s charm with her ability to make things in life a little more light-hearted and fun. That’s a true G&F artist.

Get doodled by Jana at Doodlebooth.me