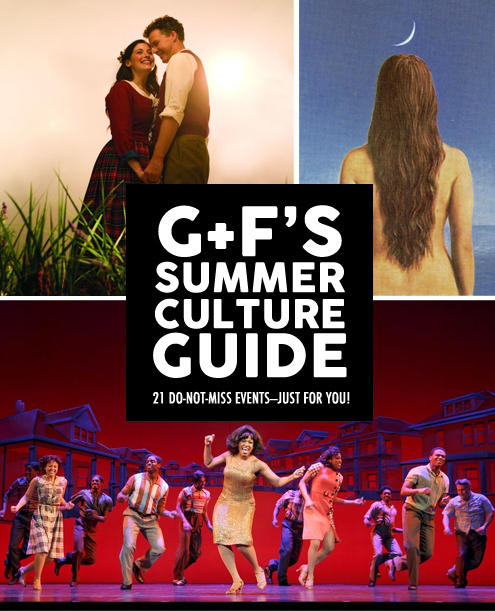 Searching for something fun to do? A little off the beaten path? We’re dishing up a list of awesome events around the city that will hopefully get you up and out of your local neighborhood spot. We combed through some of Chicago’s best musicals, plays, concerts and art exhibits to bring you our favorites to celebrate summer in style. From Broadway classics to underground pop acts, this is a must-see list for those who are looking for a little something different this season. Get inspired and learn something new through the arts, but we must warn you–be careful with all this F-U-N.

WHAT // Magritte: The Mystery of the Ordinary, 1926–1938
WHERE //  Art Institute | 111 S Michigan Avenue
WHEN // Now through Monday, October 13th
WHY // Get to know the Belgian surrealist Rene Magritte with an exhibition of his most memorable and extraordinary works. Magritte’s thought-provoking images delves into the viewer’s perceptions of reality—this is one exhibit you must not miss!
MORE // $23 | More info here.

WHAT // The Last Ship
WHERE// Bank of America Theatre | 18 W Monroe Street
WHEN // Now through Wednesday, July 9th
WHY // Catch this new musical with an original score by Sting. The Last Ship sets in a English seafaring town and follows a passionate community on their quest to preserve the only life they’ve ever known.
MORE // Tickets starting at $32

WHAT // Carrie: The Musical
WHERE // Richard Christiansen Theater | 2433 N Lincoln Avenue
WHEN // Now through Saturday, July 12th
WHY // We know you’re wondering what song could possibly accompany the iconic pig blood scene. Based on Stephen King’s haunting classic, Carrie comes to musical life as part of a Bailiwick Chicago production.
MORE // Tickets $40

WHAT // The Dance of Death
WHERE// Writers Theatre | 664 Vernon Avenue, Glencoe
WHEN // Now through Saturday, August 2nd
WHY // The Dance of Death is an emotionally-fueled show with a side of dark comedy. The Wall Street Journal reviewed it as, “so horrifically compelling as to be almost beyond priase.”
MORE // Tickets $60

WHAT // Motown the Musical
WHERE // Oriental Theatre | 24 W Randolph Street
WHEN // Now through Saturday, August 9th
WHY // Follow the musical tale of Berry Gourdy who kickstarted the careers of Diana Ross, Michael Jackson, Smokey Robinson and more, then catapulted Motown as an American cultural movement. Prepare to sing along to some classics.
MORE // Tickets starting at $27

WHAT // Godspell
WHERE // The Marriott Theatre | 10 Marriott Drive, Lincolnshire
WHEN // Now through Sunday, August 10th
WHY //  This legendary musical originally opened off-Broadway in 1971, go see why this rock opera is still considered one of the most successful shows of all time.
MORE // Tickets starting at $40

WHAT // 25th Annual Putnam County Spelling Bee
WHERE // Drury Lane Theatre | 100 Drury Lane, Oakbrook Terrace
WHEN // Wednesday, July 9th through Sunday, August 17th
WHY // This musical sets the clever and quirk level high, and what makes the show even more memorable is four audience members get to participate as fellow bee contestants. What lessons can you learn from a spelling bee and a whole lotta laughs?
MORE // Tickets $35

WHAT // MCA Screen: Leslie Hewitt in collaboration with Bradford Young
WHERE // Museum of Contemporary Art Chicago | 220 E Chicago Avenue
WHEN // Now through Sunday, August 31th
WHY // Described as urban archeology, Leslie Hewitt and Bradford Young bring together a series of filmed vignettes with sites and landscapes connected with the Civil Rights movement within the US. The video installation explores how photographs convey time and frame perceptions of history.
MORE // Admission $12

WHAT // This is Our Youth
WHERE // Steppenwolf Theatre | 1650 N Halsted Street
WHEN // Now through Sunday, July 27th
WHY // This is Our Youth chronicles three young, lost souls in New York City over 48 hours. With a cult-loving cast–Michael Cera, Tavi Gevinson and Kieran Culkin–this play exhibits the awkward age we can all relate to.
MORE // More information here

WHAT // Brigadoon
WHERE // Goodman Theatre | 170 N Dearborn Street
WHEN // Now through Sunday, August 10th
WHY // Set in mythical village that appears only one day every 100 years, this musical adventure of love and taking chances has been hailed “ravishing” by the New Yorker.
MORE // Tickets starting at $34.50

WHAT // Derrick Does (Mostly) Disco All Night Long
WHERE // Smart Bar | 3730 N Clark Street
WHEN // Friday, July 4th | 10pm
WHY // If you’re looking for an excuse not to go home, Chicago’s legendary house DJ (and Smart Bar resident) Derrick Carter is playing six hours of disco to get your dancing shoes worn in.
MORE // Tickets $13

WHAT // Charlotte’s Web
WHERE // Broadway Playhouse | 175 E Chestnut Street
WHEN // Friday, July 11th through Sunday, August 17th
WHY // If you’re looking for a theatre escapade for the family, see this classic children’s book set the stage and your favorite characters come to life.
MORE // Tickets starting at $10

WHAT // Chicago Symphony Orchestra presents West Side Story
WHERE // Ravinia | 418 Sheridan Road, Highland Park
WHEN // Thursday, July 17th + Friday, July 18th | 7pm
WHY // Get your musical fix this summer with Chicago Symphony Orchestra’s live performance of West Side Story’s score accompanied by the film projected on giant screens. Ravinia makes the perfect place for a picnic, too!
MORE // Tickets starting at $25

WHAT // Pitchfork Music Festival
WHERE // Union Park | 1501 W Randolph Street
WHEN // Friday, July 18 through Sunday, July 20
WHY // Rock out to over 40 bands and artists at one of Chicago’s most rewarding weekends of music. Must-sees include Beck, Neutral Milk Hotel, Kendrick Lamar, Grimes, Kelela, The Range and more!
MORE // Tickets $60 per day

WHAT // FKA Twigs Pitchfork After Party
WHERE // Bottom Lounge | 1375 W Lake Street
WHEN // Friday, July 18th | 9:30pm
WHY // Queen of the dreamiest music videos–proof is in her YouTube channel–Tahliah Barnett aka FKA Twigs is an electronic pop artist on the rise. Catch her at this intimate show as part of an official Pitchfork Festival after party.
MORE // $15 Tickets

WHAT // After Hours on Chicago Avenue
WHERE // West Town
WHEN // Friday, July 25th + Friday, August 29th | 6-9pm
WHY // Peruse the newest shopping scene initiative as 20 businesses on Chicago Avenue host a night to celebrate West Town. Some of our favorite shops will offer special promotions along with sips and snacks. Our faves include Le Remede, AdHoc, Sprout Home and Dovetail.
MORE // More information here

WHAT // Downtown Sound with Maps & Atlases
WHERE // Jay Pritzker Pavillion | 201 E Randolph Street
WHEN // Monday, August 4th | 6:30pm
WHY // As if you needed an excuse to enjoy the manicured lawn of the Pritzker Pavillion, Chicago’s own indie rock band Maps & Atlases graces the stage for a night of sweet (free!) tunes with a killer view of the skyline.
MORE // Free; More information here

WHAT // Chicago Symphony Orchestra presents The Lord of the Rings: Return of the King
WHERE // Ravinia | 418 Sheridan Road, Highland Park
WHEN // Thursday, August 7th + Friday, August 8th | 7pm
WHY // Lord of the Rings lovers unite! Get a little geeky at Ravinia while the Chicago Symphony Orchestra plays along to the final film of the ultimate fantasy trilogy.
MORE // Tickets starting at $25

WHAT // Robyn + Royskopp
WHERE // Jay Pritzker Pavillion | 201 E Randolph Street
WHEN // Sunday, August 24th | 7pm
WHY // Don’t miss the Swedish pop princess and Norwegian electronic duo for their Do it Again Tour. Dance under the Pritzker Pavillion for a night of shameless fun.
MORE // Tickets starting at $25