You may have tapped your toes to our #GFMusical “Steam Heat” Summer Swim editorial—if not, you totally should here! And behind the smell of the grease paint and a few pas de bourrées, there was a hardworking team making it all happen for our Summer Culture issue. Meet Kathryn Burns, the choreographer who created the movement for “Steam Heat!”

The LA-based choreographer and dancer has been making quite a name for herself in the biz, recently choreographing Pharrel’s acclaimed 24 hours of Happy music video. In all its brilliant joy and sweet indulgence, Kathryn’s unique and bubbly style is at full effect: she’s brave, she’s bold and she lets the dancers’ bodies dictate the movement structure. Such is the case with “Steam Heat!” where we cast Chicago-based models with a range of dance experience in the roles of our chorus girls. The rest is sweet dance history.

We catch up with Kathryn to talk inspiration, her musical theatre crush and the importance of mousercising at an early age. >>

Let’s get to the heart of it, how did you develop movement for #GFMusical?
I was, of course, inspired by Fosse’s choreography to “Steam Heat” but wanted to stay true to the rad original track  with a hip hop vibe mixed by DJ Matt Roan for G&F so I used the “Walk it Out Fosse” video as a reference. I liked how what I called the “Fosse Gangster Lean” from The Pajama Game in which the models lean back and bounce their hips with their arms alternating in front. I also wanted to create original movement that was Fosse-esque but beat driven and cool for the hip hop section. For example, the “Head Nod” was found by keeping it Fosse and isolating a single part of the body and combining the models’ power stance with hands on hips and keeping the beat with the head nod.

Favorite moments on the #GFMusical set?
One of my favorite moments wasn’t on the set but during prep. G&F creative director Graham was showing me the props he was bringing to set and used the vintage mic to serenade me with his rendition of “What I did For Love”, complete with a spotlight and handsome piano accompanist.

Let’s get real here. Favorite musical?
This is hard, so I will give y’all three answers. Movie musical: Singing In The Rain; Stage Musical: Dare I say CATS? We grew up going to see this musical every Christmas in Houston. I also watched the filmed stage version while studying in college. It’s a dance explosion on stage. Don’t judge; Musical album: RENT. I can sing every single song word for word and the soundtrack is they only thing that keeps me awake during long car drives.

If you could date any musical character, who would it be?
Obviously the wolf from Into the Woods! Such a foxy villain.

So what’s in this dance diva’s bag? While on set, Kathryn’s cool style and demeanor was a driving force for the G&F crew. Take a cue from Kathryn: snag the contents of her bag and start movin’ those limbs! 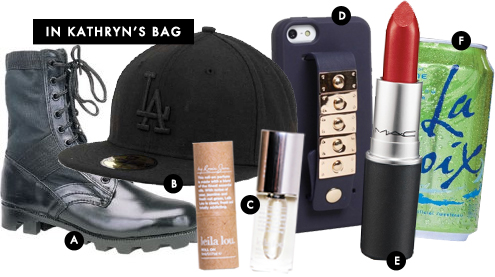 You have plenty on your resume—our most recent favorite is your work on the Happy video. How would you describe the movement in a few words?
Uninhibited playfulness. I told the same thing to all 350 plus people I coached/choreographed: “This is your Gene Kelly Singing in The Rain moment. Take the time to stomp in puddles and play in the space.”

All of this dancing fun must have started somewhere.
Earliest dance memories—GO!
My siblings and I would put on mini shows on our marble floored entry way. I was about 4-year-old and did a lyrical combo to a song off my Fisher Price Record player about the ships of Christopher Columbus, “The Nina, The Pinta and The Santa Maria.” Around the same time, I  would also choreograph to Micky Mouse Jazzercise, appropriately called “Mousercise.”

What’s next?
A few of my TV projects are coming out. I choreographed the opening credits—and directed by Fred Savage—as well a few musical numbers, for the new IFC comedy “Garfunkle & Oates” premiering August 7th. I created an 80’s-tastic dance for the upcoming season of “Key & Peele” returning to Comedy Central in the Fall. I got “Weird” with “Al” and have a little part in one of his new music videos coming out this month. Last but not least, if anyone is in LA, they can come take my dance class ICON DO THAT at The Sweat Spot where I’ll be teaching original choreography to Vogue on Sat. July 19th and come check out my monthly comedy show “Quick & Funny Musicals” at Upright Citizens Brigade Theater on August 2nd.

See more of Kathryn’s work at TheKathrynBurns.com.
Follow her on twitter for updates on upcoming projects and more.
And see #GFMusical’s “Steam Heat” story here.

ON SET PHOTO BY HELEN BERKUN