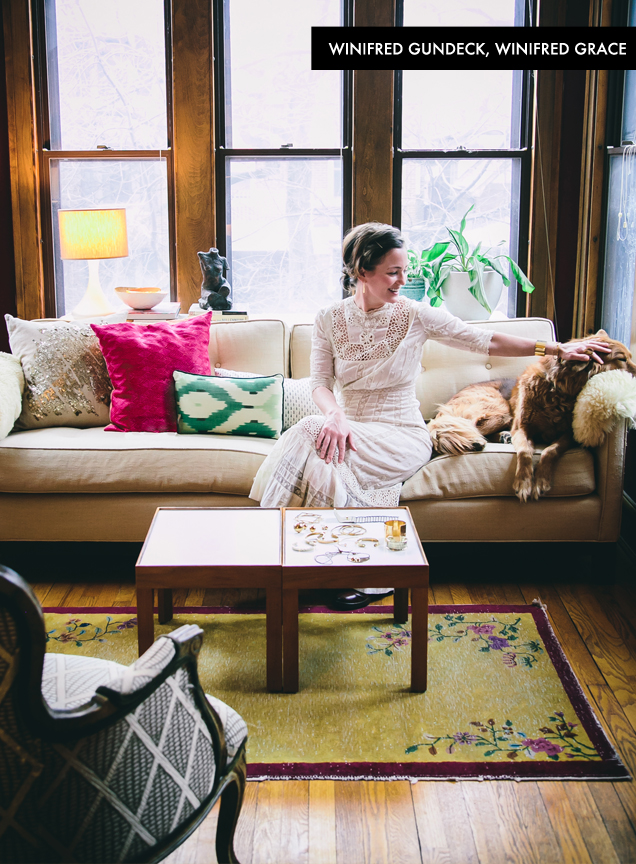 Since starting her eponymous jewelry line a decade ago, Winifred Grace Gundeck has landed her eclectic cool pieces in all the coolest boutiques in the country—in Chicago, that means chic shops like p.45, Chalk, and Elements. But, since welcoming a baby boy last year, Winifred is making big changes to her business.

While innovation often means adding layers of complexity, the rebranding of Winifred Grace leans in the opposite direction—it’s a breath of fresh, gold air. “From design to production to pricing, simplification has been key to transforming my business,” Winifred says. “I had my first baby a little over a year ago and was craving simplification in all aspects of my life.” (Design-wise, this translates to a collection inspired by basic geometric shapes, clean lines, and modern forms.) Plus, with her hands busy changing diapers, Winifred has allocated production—which until now, she was doing entirely on her own with the help of just one assistant (and, we can only assume, a little magic). Last year, she stumbled upon a workshop in Cuernavaca, Mexico somewhat serendipitously; there she met a group of women learning jewelry as a trade to support their families for the first time, and now—barely a full year later—the workshop takes care of all Winifred Grace’s metalwork. Back in Chicago though, Winifred says, “I have really been enjoying the camaraderie I have found amongst the local design world.” For instance, she loves taking part in Dose Market, where she puts her collections of beaded bracelets, hammered bronze pieces, and leather cuffs on display each month.

Despite the changes, Winifred’s jewelry remains as utterly wearable and terrifically timeless as ever. “My work will always reflect an interesting mix of materials and pattern,” the designer says. “No matter how casual a piece may be, it still has an air of sophistication,”—just like Winifred herself.