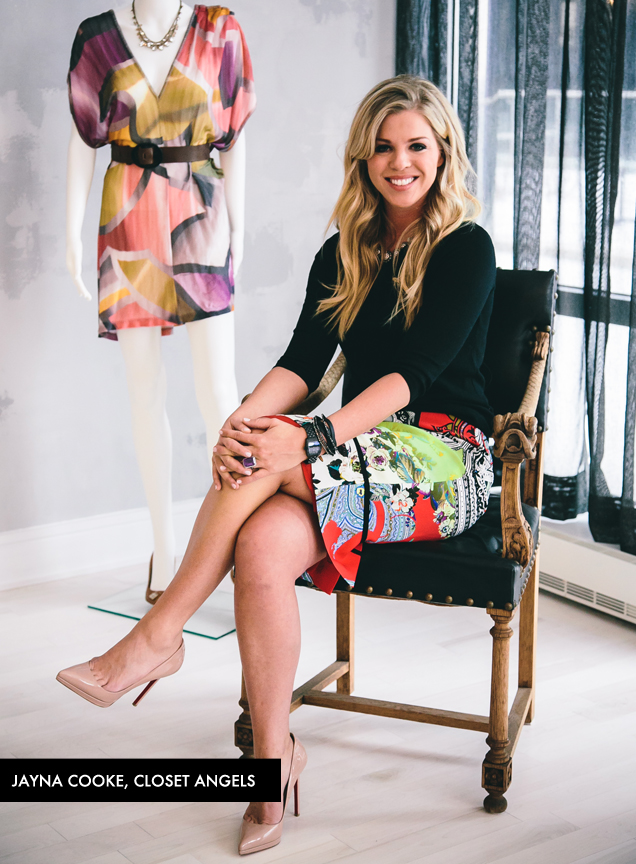 Jayna Cooke excels at just about everything she puts her mind to. It’s easy to be bitter about people like that, but not Jayna—her latest endeavor is all for a good cause (plus, she’s way to adorable not to love). Closet Angels, the company she launched in November, is consignment for a cause: women donate their old designer duds, Closet Angels sells them, and 100 percent of the proceeds goes directly to St. Jude Children’s Research Hospital.

Prior to founding Closet Angels, Jayna worked for Groupon: though she set history-making records there (at one point being responsible for a full quarter of the company’s revenue), she wasn’t able to flex her fashion muscles. Completely infatuated with the start-up scene—and frustrated by her own consignment experiences—Jayna came up with the idea for Closet Angels. And though she may be the hardest-working woman we know, she’s as yet avoided the all-work-and-no-play trap. She loves to hit up Joe’s Bar on Weed Street for country concerts, browse great vintage and foodie finds at Randolph Street Market and Green City Market, and—when friends with kids come to town—show off the Shedd Aquarium.

So what’s next for Jayna? Well, it could be any number of things, as she’s constantly thinking up business ideas. “I would say every week I have a new idea!” she says. “I wish I could someday sell my ideas and have others execute them. Execution is the hard part.” No matter what, Jayna will be one to watch, but for now, she’s laser-focused on one goal. “I would love [Closet Angels] to be a top contributor to St. Jude’s,” she says. “We have not received a Hermes Birkin bag [donation] yet, but it will be a great day when we do!”