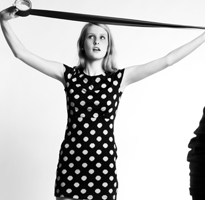 As a 15-year-old high school freshman and our youngest Cool Kid, Jordan Strange has a resume that could rival even the most successful and philanthropic of adults. The Ford model was discovered three years ago at—we’re not even kidding—a Jonas Brothers concert. Since then she’s had a steady modeling career, getting booked for photo shoots at least once a week, being transformed with makeup, hair, and clothing for each different job. From what we have become accustomed to seeing in the media, being thrown into the spotlight as a teenager could be a recipe for disaster, but Jordan seems barely effected by it all. Down-to-earth is an understatement when describing the 5’9, blonde-haired, blue-eyed beauty.

The drive she puts forth for modeling is only rivaled by the drive she puts into charity work: she talks about her work with Helping Hands, Feed My Starving Children, and other charities with an excitement only a 15-year-old can muster. Last summer, she spent a week in Nicaragua, playing with children, teaching them how to play soccer, and doing crafts with them. Back home, she’s a burgeoning style maven: on the line somewhere between still looking great in Forever 21 frocks and dreaming of being a fashion designer (“I spend history class sketching dresses,” she admits). And speaking of history, what do her teachers think of her busy schedule? “In middle school it was fine,” she says. “My teachers thought it was cool, and told me to just tell them when I would need my work in advance. But I don’t know what it will be like now that I’m in high school.” Based on her uber-impressive record, we get the idea Jordan will be just fine these next four years.

JORDAN WILL NEVER PART WITH: The homecoming dress she sewed herself (a pink chiffon confection with pearls on the front and lace sleeves).