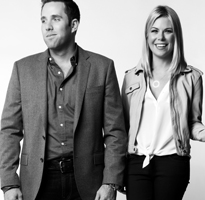 As director of sales and sales lead, respectively, for Gilt City Chicago, Jason Berngard and Nicole Banks have their finger on the pulse of dozens of local businesses. Consequently, they know the retail landscape like the back of their hands, and know how to shop it (when they have the time: Nicole is a die-hard e-shopper). Jason’s wife Samantha, another Cool Kid, can attest to that. “I wish he would let me shop for him!,” she says. But being so connected has another benefit, too. Jason and Nicole are able to contribute to local charities in a unique way: “Any time there’s going to be a raffle or an auction,” Jason says, “I can help get in touch with local businesses [to contribute items or services].” He’s done just that for his charities of choice, The Cancer Wellness Center and Common Threads. (About the latter org, which teaches underserved children the value of nutrition and how to cook, he says: “I’m so passionate about this organization. I mean, I love food.”)

Nicole gives her time to Taste of the Nation and Bright Pink. Last year she almost-single-handedly put together an auction valued at more than $20,000. “It’s a lot of hours,” she admits, “but I’m getting better at balancing it all.” The Gilt duo’s commitment to charity is undoubtedly what makes them so cool, though Jason could have had us with his I’m-not-even-trying good looks and Nicole with her I-swear-this-is-comfortable sartorial style. Luckily, the charities she supports aren’t necessarily the gala type, so she can get away with her effortless signature of dressy-meets-casual. Likewise, Jason will wear a suit if a meeting requires it (and he’ll look great doing it), but is perfectly content sticking to denim and v-necks.

JASON WILL NEVER PART WITH: “A pair of green and gray vintage Nike Dunks, hi-tops. Kind of inspired by the Boston Celtics. I seriously just don’t think I’m ever going to throw them out–and I still get compliments on them!”

NICOLE WILL NEVER PART WITH: Hangers. Shelves. Any device that keeps her clothes in order. (“Everything has it’s place,” she says, and we get the feeling she’s not just talking about her closet.)