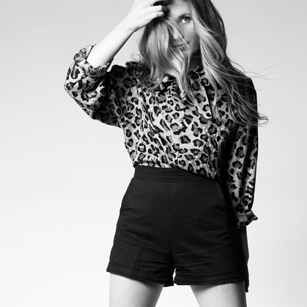 Elise Bergman finds inspiration for her eponymous clothing line in wildly unique places. On her inspiration board right now: A print designed by her friend (Michelle Vondiziano of January Prints); a poster from the 1978-79 season of the Minneapolis Children’s Theater Company; print-outs of interesting book covers; fabric swatches; prototypes for new accessories; and a 19th century Native American buffalo horn spoon that her grandmother gave her. It may seem a random gaggle of things, but it is finely curated by Elise’s intensely artistic mind. What we love about Elise is that she wants to share this creativity with others, and, let’s face it, “Fashion design and many other artistic pursuits can often be very solitary careers,” Elise says. So she finds community within the Marwen Foundation, where she shares her skills with Chicago’s underserved children, teaching them sewing, fashion and textile design, and patternmaking in after-school and weekend art programs.

On top of designing multiple collections each year, her philanthropic efforts may seem like a huge take-on, but Elise says she no longer feels like she’s juggling too much. “I’m doing something that is making me better equipped to deal with the ins-and-outs of my everyday business.” (How can you not admire that outlook?) “I am inspired by the creativity and vision of the staff and other teaching artists; and by the passion, eagerness to learn, and hard work of my students.” Elise herself displays that eagerness to learn, and has all her life—all the way back to learning style from her mother (let it be noted, Elise comes from a very fashionable family). “My mom took the most fashion risks of anybody I’ve known, but she always looked natural and effortless,” Elise says. “I aspire to be as daring and confident as she was.”

ELISE’S CLOSET: Well-organized and minimalist (to be fair, that’s only because she also has a studio space where she stores more). Full of well-made classics: black dresses, neutral button-ups and great blazers.

ELISE WILL NEVER PART WITH: “A small section of crazy pieces that I can’t get rid of that includes lots of funky prints, a couple beaded boleros, and a pair of high-waisted velvet palazzo pants.”