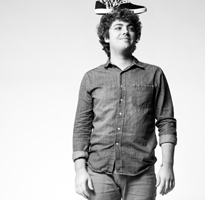 Aaron Firestein might not have loved his nickname in college—everyone called him Bucket (a long story he didn’t dare delve into)—but when he started his artist-designed footwear brand while at school, the inevitable name for the brand rolled off the tongue: BucketFeet. For Aaron, the footwear company was something stumbled upon: his style is basic, but his shoes have always been a screaming advertisement of art. When he uploaded pics of his self-decorated canvas shoes to FaceBook, and the “likes” began translating to profits, Aaron saw an opportunity to draw attention to other self-made artists like himself. “I can totally relate to people who have the talent and desire to spread their work, but lack the resources to do so,” he says. “That’s where BucketFeet comes in. We love art and we think it should be spread more, along with the stories of the artists themselves.” (Luckily for Aaron, BucketFeet caught on. An artsy kid from Berkeley, California, he just wasn’t cut out for a desk job.) Sharing the stories and work of under-funded artists is a noble campaign: everywhere else you look, arts programs seem to be taking the brunt of budget cuts. So Aaron invites artists from all over to create a pair of canvas shoes for BucketFeet, and he still creates pairs himself—in fact they sort of define his style. He lives in comfortable hoodies (again, not the desk-job kind of guy); “I don’t like to be too showy,” he says. “Except for my shoes.”

AARON’S CLOSET: Pretty organized. Colorful and comfortable. Predominately hoodies, and “I like a good jacket.”

AARON WILL NEVER PART WITH: “In the early 80’s my parents sailed from Southern California to Hawaii and made these awesome shirts for themselves and their friends that helped out on the boat. I have a shirt with my dad’s name on it. I’ll never part with that.”