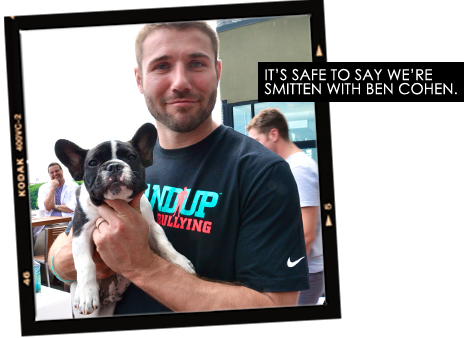 Ben Cohen was a star on the rugby pitch (or field to us Yankees), as one of the top scorers in England rugby history. But now he’s a hero to young people—namely LGBTQ youth—with his StandUp Foundation, an organization that helps raise awareness about bullying. Cohen kicked off the morning of Pride by hosting a brunch at the W Hotel Lakeshore’s Wet Deck (featured in Found! this week). Thankfully, Cohen took a moment to chat with us. After we picked our jaw up off the ground (seriously, this man is straight up hot), we were able to find out about his foundation, his family and even chat a little football (or soccer to us Yanks).

Glossed and Found: How does your foundation work?

Ben Cohen: We’re about supporting organizations and building awareness. We support people who do real world work. Our foundation is a for profit and a non-profit. It’s a business. We try to unlock new revenue, new money, new dollars or pounds or whatever, for other organizations by selling a product. So that product might be t-shirts, like our brand with Nike, or wrist bands or underwear and things like that.

GF: And you have a lot of different partners?

BC: Yeah, we have a lot of networks that we work with and support. They’re doing great work out there against bullying and we want them to carry on doing it. But we don’t only support our partners—people can apply for grants to do their work.

GF: So tell us about the underwear line.

BC: We launched our underwear line with Bluebuck and it’s doing really well. It’s outselling Armani at the moment. They’re organic, made with really quality fabric and they’re really comfortable. Even the label is made out of cotton instead of nylon that like, sticks into you. And every pair sold goes to benefit organizations, which is what we want to do.

GF: You’re traveling the world in support of the StandUp Foundation. What are a few things you can’t travel without?

BC: My iPod, my iPhone and my passport, obviously. And water, to keep hydrated.

BC: Moisturizing cream. I get a bit red under the eyes, so I use one with hydrocortizone.

GF: What’s something people would be surprised to know about you?

BC: I’m a helicopter pilot.

GF: Have you been to Chicago before?

BC: Many times. I first came here in ’97 on a rugby tour to play the Chicago Lions.

GF: Is there something you always do when you’re here?

BC: Get a Starbucks, I suppose? I don’t know. See the sights as much as possible.

BC: I get up after being woken by the children—I have twin girls—and I’ll go make a cup of tea with them, and make one for my wife.

GF: So who is your football team?

BC: Probably Fulham, because my uncle played for them. My uncle won the 1966 football World Cup [as a player for England]. So we’re a unique family double, with World Cups in rugby and football. We’ve got an interesting sporting background.

GF: So are you watching the game today? [G&F Editor’s note: England played Italy in the Euro 2012 cup Sunday afternoon. Are you surprised we knew that?]

BC: Probably not. I haven’t seen any of it. And it sounds [like they’ve been doing] really bad.

GF: Yeah, I watched the game against Ukraine and it wasn’t great.

Learn more about the StandUp Foundation at StandUpFoundation.com.